The Young And The Restless Spoilers: Ashland’s Desperation Opens Door – Victoria Is Destroyed 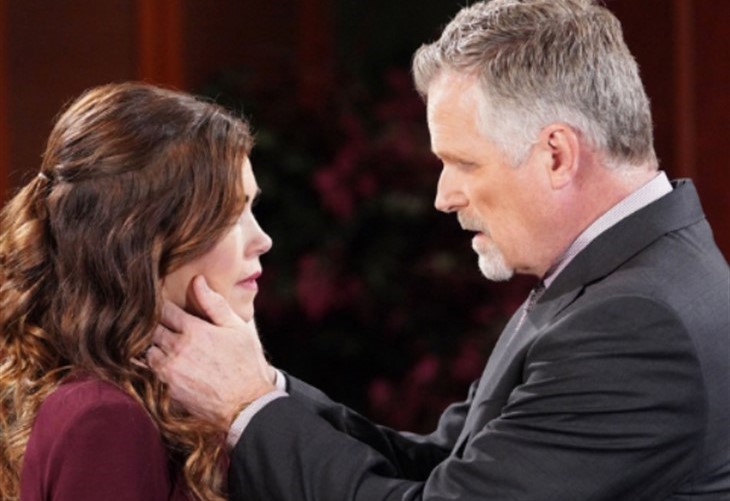 The Young and the Restless spoilers document that Ashland Locke (Robert Newman) did not admit wrongdoing. Instead, he told Victoria Newman Locke (Amelia Heinle) that he could not continue.

Ashland’s admission, in front of her parents and two brothers, was the climax to a crescendo that has rapidly built in recent days. Victoria told Ashland that she still wanted to believe him, but he turned and walked out the door of their shared Chief Executive Officer’s suite at Newman-Locke.

The Young And The Restless Spoilers – Crying In Mother’s Arms

Only Victoria’s detractors felt nothing as she collapsed into her mother’s arms following Ashland’s departure. Victoria interpreted his words and exit as proof that her husband lied.

The Young And The Restless Spoilers: Ashland Underestimates Adam – Victor Will Not Relent

Victoria now believes Ashland was merely playing off her emotions by claiming to have cancer and fronting dedication to his wife. The endgame appears to have been gaining a foothold at Newman Enterprises, with Victoria convinced to push for the merger of her family company and the Locke Communications Group.

Victoria’s fall into Nikki Newman’s (Melody Thomas Scott) arms was heart-breaking. Unless Ashland can prove his frame claim, Victoria’s worst fear has been realized and will play out painfully.

Devoted fans must be wondering where the Ashland character will be written if he did lie about having terminal cancer? What type of storyline will the recast character Newman was hired to play have left from here?

Ashland could be a short-term character based on Richard Burgi’s (Ashland) exit and Newman’s hire. Newman’s thirteen-week contract might be the limit if Ashland is leaving Genoa City, Wisconsin, or be arrested and jailed.

Possibly TPTB hired Newman to play out the remainder of the storyline that Burgi was scheduled to play. Newman debuted in early February and should appear in scenes at least through the spring unless Ashland can reverse his downward trajectory.

The Young and the Restless Spoilers – Lockeness Monster Redemption Story

Redeeming the Lockeness Monster would be quite the accomplishment. Believably presented to the audience, Ashland could be on his way to being a permanent part of the cast. This could be why someone who has the daytime stature that Newman does was specifically hired.

Victoria is devastated because she loves Ashland. But Ashland continues to reiterate that she has changed his life for the better and that he loves her completely.

With whatever his lies or lack thereof, Ashland can redeem himself. Victoria is the one person who will give him a chance to do so. Plus, there is the completed merger as well.