Days Of Our Lives Spoilers: Craig Proposes To Leo 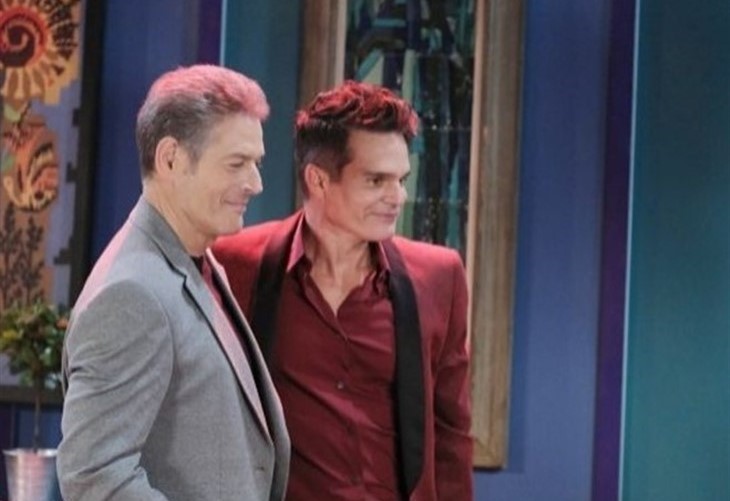 Days of Our Lives spoilers and updates tease that Craig Wesley (Kevin Spirtas) will propose to Leo Stark (Greg Rikaart) in a plan to prove how serious he is about his boyfriend in an upcoming episode of Days of Our Lives!

Days of Our Lives viewers will remember that at first, Chad DiMera (Billy Flynn) was very hesitant about trying to maneuver Leo into his bed as a set up for Craig to find them together, hoping Craig would dump Leo right then and there! Days of Our Lives viewers will remember that Chad’s been having nightmares about Leo trying to get him into bed ever since they were all out west, and Chad joined in on a drag queen performance as Belinda Chinashop – this took place on the streaming Peacock spinoff, Beyond Salem.

Days Of Our Lives Spoilers – Allie And Chanel Try Romance!

Chloe Lane, (Nadia Bjorlin), Brady, Chad and Abigail DiMera (Marci Miller) had put together an elaborate plan to expose Leo for the schemer he is, including Chad agreeing to pretend he’s interested in him sexually! Undoubtedly, Leo will return the attraction, considering he is attracted to virtually every man in the universe, so that shouldn’t be a difficult feat to accomplish!

Days of Our Lives viewers will see Leo is really enjoying Chad’s fake flirtations, although at first he’s a little bit suspicious when Chad gets drunk – more likely fake drunk – and wants him to get in bed in Leo’s hotel room! Days of Our Lives viewers will see that once Leo believes that he’s not just being set up, he’ll jump in feet first, having fallen for the ruse hook, line, and sinker!

In the meanwhile, the others are at the ready for their part of scamming the scammer; while Leo leaves the room momentarily, Chad will call Abigail and tell her Leo took the bait. Abigail takes the information and passes it on to the next link in the chain, Brady, who’s on the phone with a guilty feeling Chloe, who is wondering if they should call it off until Brady tells her all systems are go! Chloe then calls her father and tells him to knock off of work early and come “home” to spend time with Leo!

Days Of Our Lives (DOOL) Spoilers: Brady And Chloe Take It To The Next Level @soapoperaspy https://t.co/YbpFPuA7Ec #DOOL #DaysOfOurLives

Days of Our Lives viewers will see that it at first, it appears the plot worked like a charm, when Craig gets back to his and Leo’s hotel room to find Leo in bed with Chad!

Craig doesn’t understand why Chad would do this and he admits he was doing friends a favor. Craig comes up with what he thinks is a foolproof plan to prove to Chloe and the others how serious he is about Leo, and he proposes marriage to him; Leo is thrilled!