The Bold And The Beautiful Spoilers: Thomas Does Not Spill The Truth – Sheila Reveals Herself? 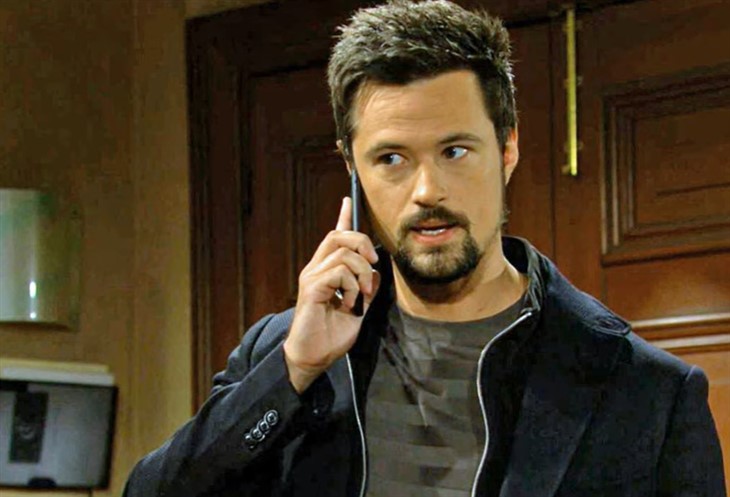 The Bold and the Beautiful spoilers document that Thomas Forrester (Matthew Atkinson) is teased to continue holding power on B&B.

Thomas has waited many years for his parents to have a real opportunity to reconcile. He sees Brooke as the destabilizing influence in his father’s life. So, following Sheila’s advice, and keeping her secret, appears to benefit the Brooke- Ridge Forrester (Thorsten Kaye) reunion push.

Steffy Forrester Finnegan (Jacqueline MacInnes Wood) overheard a tense phone conversation her brother was having with Sheila. Wood’s character could not let that moment go and trailed Thomas to an ally behind Il Giardino.

As pretty as the often-used outdoor restaurant scene is, the area behind the restaurant was filthy, stinking dirty. What better place than to meet with the ogre, Sheila?

The above telegraphs to Steffy learning the truth shortly. But even when that happens, she has no incentive to tell her father or Taylor Hayes (Krista Allen).

John Finn Finnegan (Tanner Novlan) contacted his birth mother out of the blue. He just so happened it was time to check in on her.

Jack Finnegan (Ted King) and Finn’s revealed, adoptive mother, Li Finnegan (Naomi Matsuda), have been off-screen in recent months. That is a shame, as both characters and the actors who played them have plenty of plot to play if TPTB green-lights those stories.

It feels as though Finn’s parents are more likely to be written back into the show if some major drama happens with Sheila. Jack certainly has more to say to her, and Li’s conflict with Brown’s character is natural to be exploited in daytime.

Finn’s intent to bond could allow him to learn what Sheila did. He would not remain silent, based on the morality of this character.

The Bold and the Beautiful Spoilers: Did Ingo Rademacher Lose Out On A Chance To Return As Thorne Forrester? #bb #BoldandBeautiful

The Bold And The Beautiful Spoilers – Sheila Carter Is So Undisciplined

Sheila should have never said one word to Thomas about switching the champagne labels. Even broaching that subject was dumb.

But Sheila is undisciplined. She has no filter, and since she has no known loved ones nearby, other than Finn, Sheila has no one to keep her in check.

Thomas can spill the truth. But the more likely candidate is Sheila. Yes, B&B’s infamous villain projects as the person who tells Brooke the truth. That projection, if realized, would set off tremendous daytime fireworks, with mega consequences to follow for all involved.