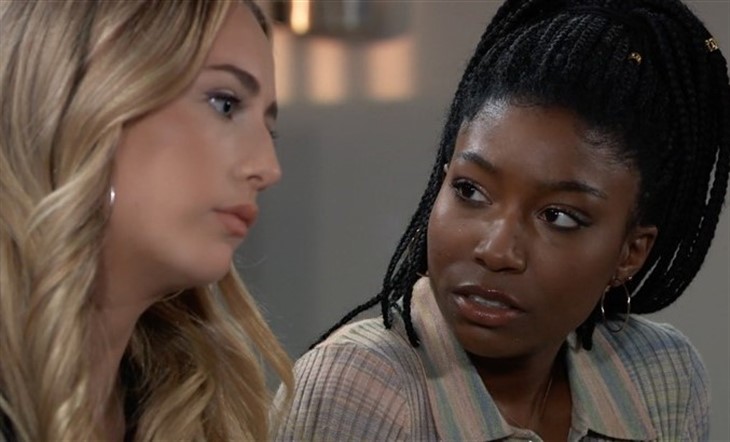 General Hospital spoilers reveal a brand-new Trina making her mark on the soap after Sydney Mikayla’s departure from the role last week.

Tabyana Ali is stepping into the role of Trina Robinson when the character finds herself in a precarious situation. She knows she had nothing to do with that video of Cameron Webber (Will Lipton) and Josslyn Jacks (Eden McCoy) making love for the first time that countless people have now seen.

However, there is evidence piling up against her and when that burner phone is found in her possession, Jordan Ashford (Tanisha Harper) is forced to make an arrest. She doesn’t like doing it, but she has to do her job. Between the phone in Trina’s bag that Esme Prince (Avery Kristen Pohl) put there and the call Esme made to the tip line lying about Trina, the young lady finds herself in big trouble but Ali is able to understand her character and what she is going through.

GH Spoilers – Trina Robinson Is Determined To Clear Her Own Name

Will Joss and Cam really believe their friend Trina would do this to them? If they do, they are not very good friends at all. And although Trina knows there has to be a way to convince everyone she absolutely did not do this, she is also scared out of her mind.

General Hospital Spoilers: TJ And Molly Intend On Showing Their Loyalty To Alexis

“I definitely wanted to play it as a vulnerable moment but also as a fighting moment,” Tabyana Ali said in the April 5 edition of Soap Opera Digest. “I wanted to show that yes, Trina is growing up, but she’s still a kid, and yes, she’s very passionate and strong, but even a strong person would feel this hurt. This is something she never thought would happen. I don’t think it came to her mind that something like this would come onto her path. It’s a very shocking moment for her.”

Of course, both of Trina’s parents are at her side, but there is still another secret and only Esme knows what it is because she made it happen.

One story point just hanging out there is that Esme gave Trina some pretty serious drugs and mixed them with alcohol that night at the cabin and nobody knows this yet. This is an important topic to address, as is the sex tape, and GH would do good not to leave that part of the story falling by the wayside. Stay tuned to General Hospital weekdays to see how this plot plays out.