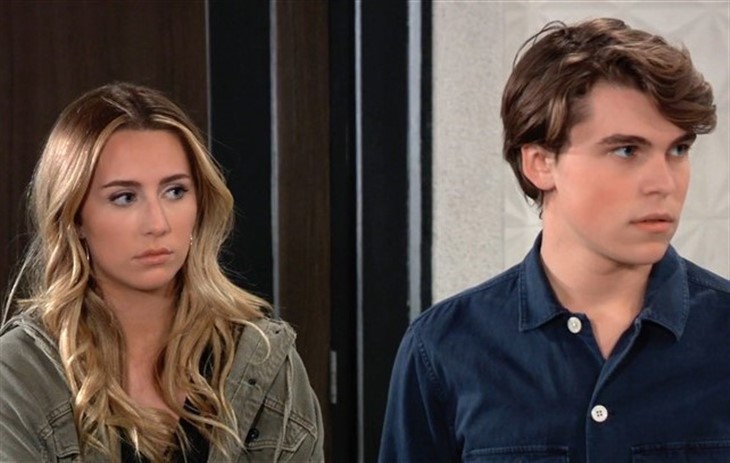 As Scott Baldwin (Kin Shriner) represents Trina Robinson (Tabyana Ali) in court against the charges brought against her by an unwilling Port Charles Police Commissioner Jordan Ashford (Tanisha Harper), Joss and Cam close ranks and stand firm to support their friend. General Hospital viewers will recall that Jordan was forced to arrest Trina after Esme called the PCPD tip line and identified her, saying she had witnessed her reviewing the video before uploading it to the internet and the Port Charles University website.

Then Esme managed to slip the burner phone she had filmed Joss and Cam on having sex into Trina’s purse to make sure the “right person” was arrested, as General Hospital viewers will remember! Josslyn had just made up with her best friend in the classroom at Port Charles University where Professor Khan (Alison Martin) and all the people in Joss and Cam’s class that day saw them up close and personal! Trina had come to attend a class and Jordan was forced to pick her up for questioning and then arrest her because of the planted “evidence”!

General Hospital viewers can assume that when Trina was arrested and brought into the Port Charles Police Department, someone called Ava Cassadine (Maura West) who rushed over right away; Ava may have asked Scott to represent Trina. It could have been Cameron as well, since Scott is like a grandfather to the Webber boys, being the late Franco Baldwin’s (Roger Howarth) father; as Trina was being taken to the station, Joss followed as well, and more than likely Cam. General Hospital viewers will recall Joss trying to point Detective Dante Falconeri (Dominic Zamprogna) in the right direction, telling him that Esme is the one the PCPD should be questioning! In spite of their embarrassing and difficult situation brought by being internet revenge porn stars, Joss and Cam want to support Trina by testifying in her behalf; and since they obviously were there the night the video was made, they can be favorable witnesses.

General Hospital viewers can imagine that Scott will ask Cameron if he’s sure he wants to take the stand, and Joss as well, since they have been the victims in the crime. It might be a little tricky legally for their testimony to even be allowed, but they want to do what they can – even if only to swear to Trina’s having been unable to set up the phone to film at the time clearly shown on the recording.

Even then it’s a he said – she said – anonymous she said situation, because nothing can really be proven about Trina’s whereabouts at the time, although Scott will try to get them approved as favorable witnesses and their testimony entered into record. However, as General Hospital viewers can imagine, if Scott can talk the judge into it, the testimony of the victims in the crime being favorable against the accused could carry great weight in the decision of the judge! But Scott will caution both of them to take care not to implicate or point fingers at Esme on the stand or their testimony could be thrown out!