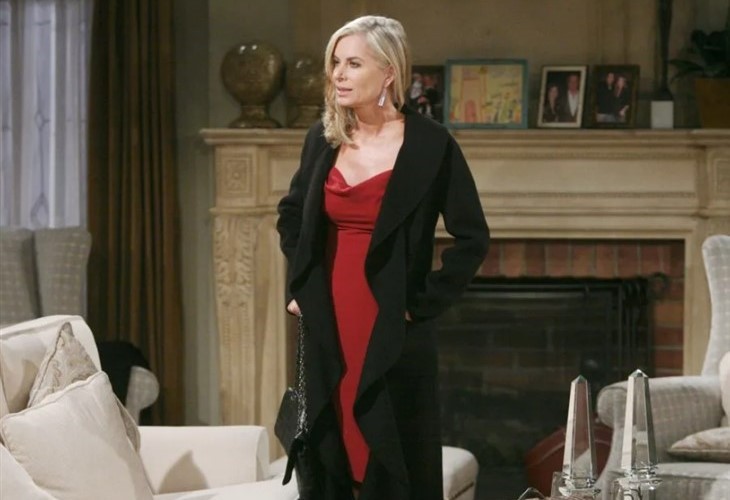 The Young And The Restless Spoilers – ‘Ashtoria’ Embrace

Y&R spoilers reveal that Victoria is still reeling over finally seeing the truth about Ashland. Even though Ashland walked out on Victoria during the Newman family’s intervention, the con artist isn’t done yet. Once Victoria is away from her family, Ashland makes his move and approaches her. The weekly preview shows Ashland and Victoria embracing.

Ashland is holding onto Victoria with a desperate death-grip, though. When the camera shows Victoria’s face, which is hidden from Ashland, she looks worried. Nick Newman (Joshua Morrow) and Billy Abbott (Jason Thompson) look on with shock.

Nick is buying the performance. At least, let’s hope this is a performance on Victoria’s part. It’s hard to imagine she would really take Ashland back after everything. Victoria probably has a plan to manipulate the master manipulator. Even though Victoria could be plotting revenge, could she get burned?

The Young And The Restless Spoilers – Ashley Abbott Attacks

The weekly preview also features Ashley, who is shaming Phyllis. Y&R spoilers reveal that Ashley isn’t thrilled with Jack Abbott (Peter Bergman) reaching out to Allie Nguyen (Kelsey Wang). As Jack tries bonding with Allie in L.A., Ashley bashes Phyllis for encouraging it. However, who is right in this situation?

It appears Diane Jenkins (Susan Walters) is stalking both Allie and Jack. So, Allie seems innocent in this whole scheme. However, what is Diane’s ultimate goal, and could Allie have some dark secrets of her own? As fans know, soap characters are usually shrouded in some sort of mystery. Allie might not be a bad girl, but she could have some mysteries or secrets that will come out later.

Lauren has been frantic and frazzled over her husband’s disappearance. Lauren’s prayers are answered when she gets a surprise visitor, though. As Kevin Fisher (Greg Rikaart) steps aside, Michael Baldwin (Christian LeBlanc) walks in and tells Lauren, “Hello, gorgeous.”

The Young and the Restless Spoilers: Connor Is No Fan Of Adam’s Girlfriend Sally Spectra #yr #youngandrestless
https://t.co/GV123uoEhU

Now, what happened to Michael in Peru, and can he prove that Ashland was involved? Could Victoria’s life be in danger when she plays games with the “Locke-ness Monster?” Share your thoughts and keep watching the CBS soap to find out what happens next.