Days Of Our Lives Spoilers:  Allie Tries To Get Johnny To Fight Off The Devil 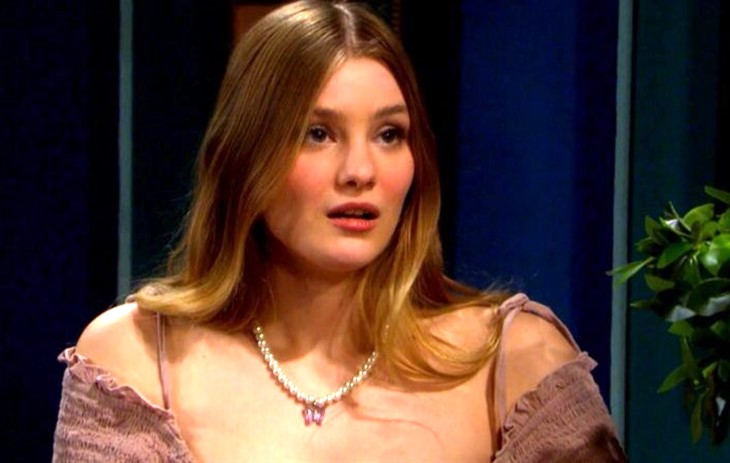 Days of Our Lives spoilers and updates tease that Allie Horton (Lindsay Arnold) will try to get her brother Johnny DiMera (Carson Boatman) to fight off the devil in an upcoming episode of Days of Our Lives!

Days of Our Lives viewers will remember that Johnny DiMera became Johnny DiDevil right after satan was cast out of his and Allie’s grandmother, Marlena Evans (Deidre Hall); everyone in the family who was in town joined together in love.  Johnny, who was vulnerable to possession because of making the movie about Marlena’s possession, has done many destructive and horrible things that have ruined many lives including his own marriage to Chanel Dupree (Raven Bowens)!

Days Of Our Lives Spoilers: Rolf Bargains His Freedom For Sarah’s Cure

But the devil apparently has not been able to hide in Johnny forever, and Days of Our Lives viewers know it was only a matter of time before he’d have to jump again! It looks like Allie has figured things out and with so many suspecting it’s Johnny who is possessed now, she tries to force her twin into fighting the devil out of himself, apparently having seen his eyes turn yellow-telltale proof! He had everyone fooled including Belle Brady (Martha Madison) herself into thinking Belle was the one with the problem!

Days of Our Lives viewers know that there are some sets of twins who have a twin connection to each other all their lives, although this may not apply to Johnny and Allie. They are actually twins who are half-siblings, with their mother Sami DiMera (Alison Sweeney) having been pregnant with Lucas Horton’s (Bryan Datillo) baby, Allie, and EJ DiMera’s (Dan Feurreriegel) baby, Johnny.

Days of Our Lives viewers know that is a bizarre situation – but then there are a lot of bizarre situations, and bizarre people around Salem – not everywhere do people come back from the dead or become demon possessed! Perhaps Allie thinks whatever small half-twin connection they have with each other will help her help Johnny get free from satan – it looks like she still loves her half-twin even though as Johnny DiDevil he’s done things to ruin her life as well! Prior to Allie realizing her brother needs some very specialized help, she and he have a huge showdown, and that’s probably when she sees the devil in Johnny!

Days Of Our Lives Spoilers – Allie Horton Shouldn’t Take On Johnny DiDevil Alone, But She Does!

Viewers will remember that MarDevil threw Shawn Brady (Brandon Beemer) across the room and set the Christmas angel afire with a pair of tiki torches, among other things, before Father Eric Brady (Greg Vaughan) arrived as reinforcements when John Black (Drake Hogestyn) wasn’t able to exorcise satan from Marlena. There is a good chance that if Allie and Johnny are able to get the devil out of him, satan will simply jump into her, leaving Johnny unconscious on the floor!