The Bold And The Beautiful Spoilers: Finn Shocked By Truth – Steffy Uses Weapon Against Sheila 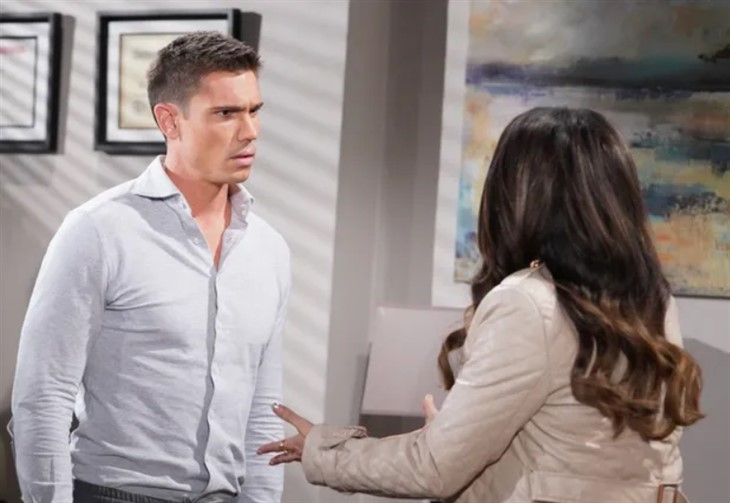 The Bold and the Beautiful spoilers document that John Finn Finnegan (Tanner Novlan) just met with his birth mother. He cares about Sheila Carter (Kimberlin Brown) and remains curious about her life.

Of course, Sheila will not take responsibility and instead hold Steffy accountable. That conflict is teased to create massive fallout, with the climax to this storyline, that has been building since the end of last year, arriving with a loud thud.

Steffy knew that Sheila had not changed. She sensed it in Sheila’s demeanor since the moment Finn naively introduced his mother at the wedding reception.

Sheila’s insurmountable problem involves her champagne label switch not being kept between Thomas Forrester (Matthew Atkinson), Steffy, and Finn. The Forrester and Logan families will know what Sheila did and hold her accountable.

It would seem that Brown’s character will either be forced out of Los Angeles, California, leave voluntarily after her bond with Finn is irreversibly broken, or she will be arrested.

A villain like Sheila can never truly be eliminated, right?

Finn was very cautious these past months. Sheila did not do anything terrible to him or his son. But what she did to Steffy’s family and many others in daytime days gone by could not be overlooked.

The decision to follow Steffy’s advice was smart. But, as viewers know, Finn did take the initiative and check in on Sheila.

Sheila lied to her son when saying that she had done nothing that would bother him. She believed that her actions against Brooke were protected, which made it all the more foolish to provide Thomas with full details.

The Bold And The Beautiful Spoilers – Sheila Carter Must Fight Back

Sheila has a well-documented history of attacking others. Her untreated mental illness enables irrational thoughts, with created enemies targeted for takedown.

Brooke Logan Forrester (Katherine Kelly Lang) became Sheila’s latest target when that scenario could have been avoided. Lang’s character should have restrained herself. Instead, she provoked Sheila when threatening to shield Finn and his family from her.

Sheila created a classic soapy villain revenge plan, exacted it, and is beginning to face the consequences she deserves. But devoted B&B fans know that innocent, connected characters often become victims as collateral damage unfolds. And so, the pattern is predicted to repeat.