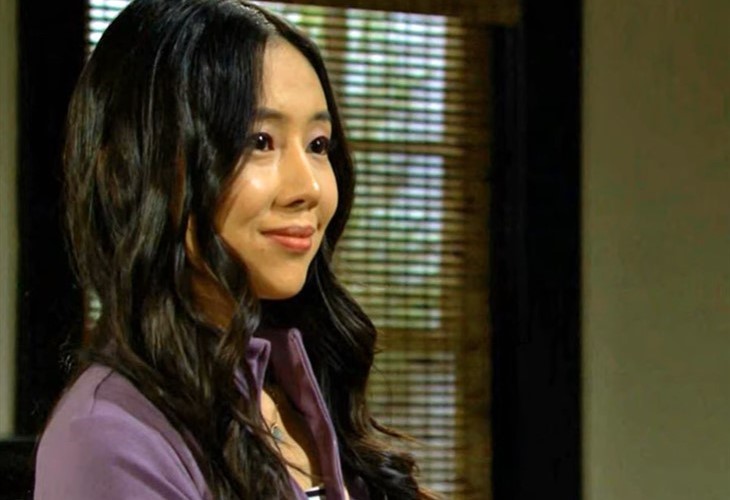 The Young and the Restless spoilers document that Allie Nguyen (Kelsey Wang) has spoken of her mother. She has a strained relationship with the only family member she knows beyond her aunt, Mai Volien (Marianne Rees), and grandfather, Jack Abbott (Peter Bergman).

However, it is fair to question Allie’s paternity now that Diane Jenkins (Susan Walters) is back on Y&R. Walters’ character is referring to herself as Taylor Jensen for at least one purposeful reason.

Diane shielded her identity because she did not want Allie to know her real name. That moniker could have been provided to Jack.

Of course, Diane’s game is to surprise him with her rise from the grave. But could she also be Allie’s mother?

Hopefully, this storyline does not involve two presumed deaths. It would have been great for Keemo Volien Abbott Nguyen (Philip Moon) to be seen again on Y&R, but that is not possible.

News of Keemo’s death saddened longtime viewers who recalled Jack’s love story from the mid-1990s. While he and Keemo endured harsh moments and did not stay in touch in recent years, their connection was touching. Plus, there would have been plenty of drama to mine during what could have been Moon’s reprised role.

This is soap. So, it is always possible that Keemo is not dead, meaning he faked his passing or is falsely presumed deceased. But with Diane’s revival, it would be even more preposterous to witness Keemo’s resurrection.

The potential for a long, fulfilling arc is clear. While it will never make up for the lost time and break from Keemo, Jack will bond with Allie.

Allie’s backstory has plenty of space to fill. Viewers know who her father was. They know she is connected to the Abbott family, which should mean that Allie moves to Genoa City, Wisconsin, soon.

But the Diane attack, which is an accurate verb to insert in the first part of this sentence, is a pivotal part of Allie and Jack’s introduction to each other. That is not fair to either of them. So, why is it happening?

The Young And The Restless Spoilers – Diane Jenkins, The Architect

An architect is a designer and a supervisor of creations. That description begs many questions about Diane’s intentions.

What is her goal in arranging Allie and Jack’s meetup? No matter how well-intentioned, coupling it with a return from the grave is wildly uncouth.

Diane died while being on bad terms with many people. She was not one of Jack’s favorite people. Also, imagine how their son, Kyle Abbott (Michael Mealor), will react when he learns that his mother hid for years.