The Bold And The Beautiful Spoilers: Steffy And Sheila’s Fight Escalates – Finn Takes The Hit? 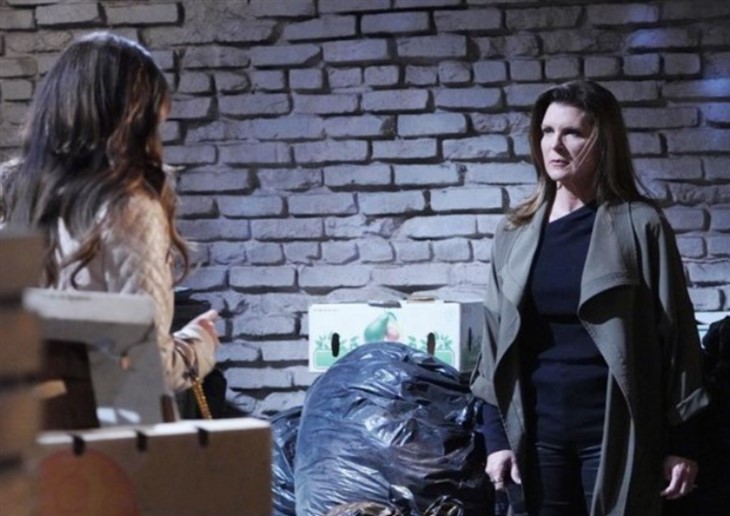 Sheila was provoked after Steffy told her that she would never be part of John Finn Finnegan’s (Tanner Novlan) family or the Forrester clan. Brown’s character felt Steffy’s lack of respect was outrageous because what has transpired since New Year’s Eve is the reason why Taylor Hayes (Krista Allen) has an opportunity to potentially reconcile with Ridge Forrester (Thorsten Kaye).

The Bold And The Beautiful Spoilers – Why Go To Il Giordino?

Steffy appointed herself Sheila’s judge and jury when bee-lining to Il Giordino. What was she thinking?

Finn was busy at work after Steffy thought it was best to go to the hospital and tell him that she was right about his birth mother. And that is the gist of what this confrontation is all about.

Sheila pushed Steffy off her game. While Wood’s character did not slap Sheila’s face, as happened twice before since her mother-in-law returned to Los Angeles, California, she did Brown’s character that she was through. That type of threat provoked the villain’s rage.

Deep kudos to Wood and Brown for delivering an outstanding collaborative performance, with the crescendo scene built through two settings. Steffy’s follow of Sheila from the outdoor dining area to the alley behind the popular restaurant was fantastic drama.

Steffy wavers between talking down to Sheila and looking afraid of her. Sheila generally kept a lid on her wild behavior these past months.

Yes, Sheila switched the champagne labels, which underscored that she has not changed, as Steffy said. But if Sheila could have only restrained herself after

Steffy got in Sheila’s face in the alley, as she did when her face was slapped then teased terror could have been avoided.

The Bold And The Beautiful Spoilers – John Finn Finnegan Telegraphs His End?

Soap fans are savvy. So, they know that Finn and Steffy’s very recent recollection of their love story, with the accompanying retrospective, felt darkly ominous.

Wood is expected to deliver her third child this spring. Viewers can see that she is showing, based on the costume choices that were made for Steffy in recent weeks.

It would be catastrophic if B&B killed off Steffy. That will hopefully never happen, as Wood is a great lead actor.

Brown’s antagonist carved her niche on this soap three decades ago after crossing over from The Young and the Restless. Hopefully, Sheila and her perceived friend, Deacon Sharpe (Sean Kanan), live forever.

All the best is desired for Novlan’s character. But Finn is the most likely of the three to be targeted by Sheila’s reckless behavior in that alley, where she and Steffy are battling. Hopefully, no matter what happens, Finn lives.