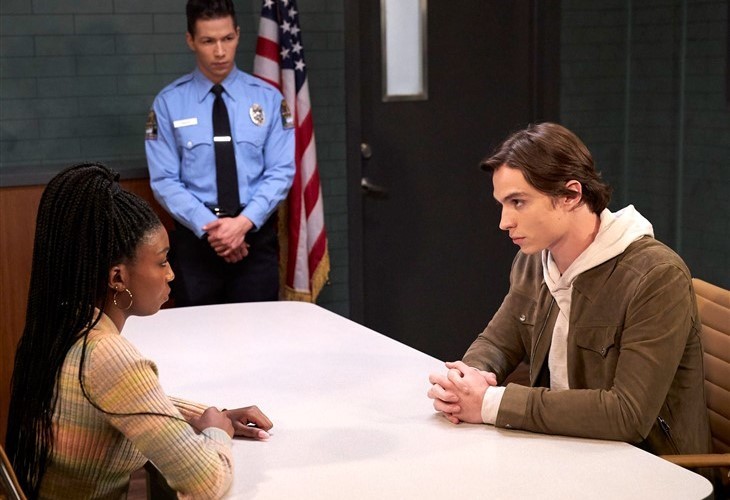 General Hospital Spoilers tease that Trina Robinson (Tabyana Ali) was released without bail regarding the charges stemming from the x-rated video of Cameron Webber (William Lipton) and Josslyn Jacks (Eden McCoy) having sex. As viewers know, Esme Prince (Avery Kristen Pohl) is the guilty party but she has gone out of her way to make it look like Trina was the one behind the video. And while Trina has a lot of people in her corner, it may come down to Trina herself to prove her own innocence. But Trina won’t have to do it along, and rookie police officer Rory Cabrera (Michael Blake Kruse) may be just the person to help Trina save herself.

Rory is the newest Police Officer to join the ranks. He’s been working as Trina’s guard since she’s been under arrest and in police custody. He’s been very kind to Trina and that may turn into a crush of sorts. Look for Rory to perhaps go out of his way to help see that justice is done. This could get him in trouble with his bosses, but Rory may not be able ignore Trina’s plight. He may even take to investigating on his own. This could bring him into even closer contact with Trina.

GH Spoilers – Trina Robinson Needs All The Help She Can Get.

Esme has done a great job of framing Trina. Perhaps if Trina tells her story to Rory, she will let something slip that no one else has looked into. Look for Rory to ask Trina, and maybe even Joss and Cameron to go back over what happened at the cabin. Perhaps Rory will uncover the fact that Trina was drugged. That could lead to the fact that Esme was prescribed some very powerful narcotics. Perhaps if they can prove Trina was drugged, it will be one step closer to proving Esme planned to frame Trina from the very beginning.

General Hospital Spoilers – Esme Prince Appears To Have Thought Of Everything!

And although Esme seems to have thought of everything, she can’t have covered all her tracks. Perhaps through good old-fashioned detective work, Rory and Trina can find enough evidence to exonerate her. This likely won’t sit well with Rory’s superiors but it will all be worth it if he can help Trina prove her innocence. This could be the beginning of a new romance between Rory and Trina, if they can prove Esme set Trina up!

Will Rory begin his own investigation? Can he find something no one else has? Who will be the one to bring Esme down? Anything can happen in Port Charles so stay tuned to General Hospital airing weekdays on ABC. And don’t forget to check back right here regularly for all your General Hospital news, information and spoilers!