The Bold And The Beautiful Spoilers: Taylor And Ridge Impacted By Sheila Reveal – Brooke Is Restored? 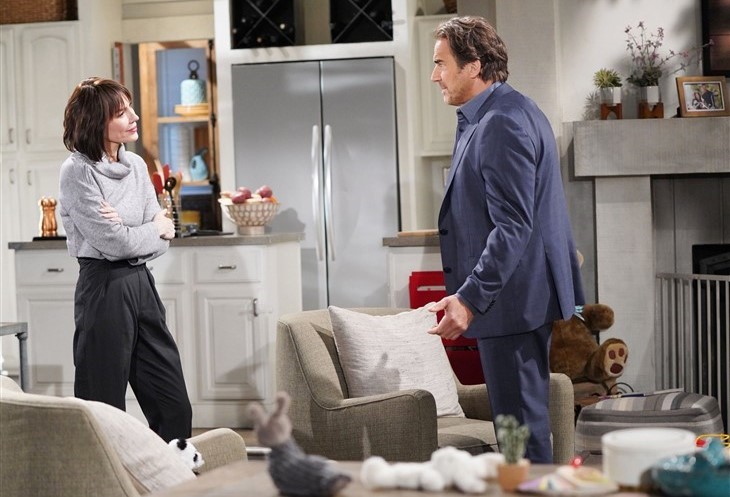 The Bold and the Beautiful spoilers document that Taylor Hayes (Krista Allen) finally reached the point where she can talk about reconciling with Ridge Forrester (Thorsten Kaye). He appeared to be done with Brooke Logan Forrester (Katherine Kelly Lang), in what was not an acrimonious break.

But Brooke has recently begun saying that she felt an outside force was working against her. She could not put her finger on the soapy reason, with viewers knowing her name was Sheila Carter (Kimberlin Brown).

The Bold And The Beautiful Spoilers – Forrester Children’s Responses Believable?

Thomas Forrester (Matthew Atkinson) was conflicted. He does not want his father to be with Brooke, holding her responsible for Taylor being blocked.

The Bold And The Beautiful Spoilers: Steffy And Sheila’s Fight Escalates – Finn Takes The Hit?

So, hardcore viewers have to ask themselves if it is believable for Thomas to have been so fired up about Sheila’s secret? He did not feel that way when Quinn Fuller (Rena Sofer) pulled a similar alcohol trick with Brooke more than a year ago.

And then there is Steffy Forrester Finnegan’s (Jacqueline MacInnes Wood) reaction. She knew something was up with her brother but could not get him to admit what it was. The plot was pushed to the point where Steffy overheard Thomas recapping Sheila’s duplicity during a phone call. That led to John Finn Finnegan’s (Tanner Novlan) shooting.

Having Sheila pull a gun on Steffy and then not be able to stop herself from pulling the trigger as Finn moved in front of his wife evoked the suspension of disbelief scenario.

Sheila is an experienced gun user. As the characters have been discussing for months, Brown’s character has a criminal history that involves shooting Taylor and Brooke approximately two decades ago.

Yet, Sheila pulled the trigger, with the bullet entering the right side of Finn’s chest. So, she did not hit his heart, which would have been instant death. The bullet’s path enables the possibility of a non-fatal incident on B&B, as a likely high percentage of Finn and Steffy fans are praying for.

Unless something happens to Steffy, Brooke will immediately learn the truth. Ridge will as well, which then impacts his thinking about Taylor.

However, the aftermath of the shooting is intentionally unclear. That creates the possibility for Steffy to become an additional victim of Sheila, which would shield Sheila’s secret for an indefinite period.

In the above instance, Brooke remains in Limbo. But the truth is on its way out, meaning that odds of Taylor’s reunion with Ridge are likely lessening.