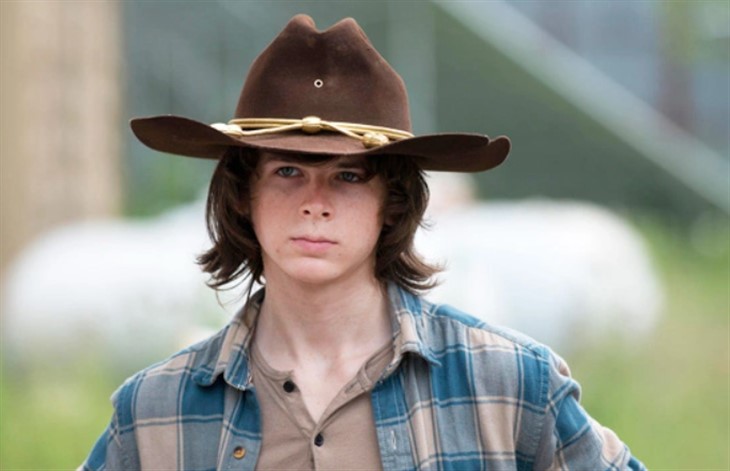 The Walking Dead spoilers and updates tease that fans have spotted Chandler Riggs in a photo that featured the show’s official cast and crew that was shot at the Hilltop set in Senoia. Not only that, the actor tweeted that he’s in the final episode of TWD. Does this mean he’s reprising his role as Carl Grimes?

The actor, who played the character in the first eight seasons of The Walking Dead tweeted, “I am in the final episode of TWD,” on April 1. However, it seems like the actor played an April fool’s joke since he posted a follow-up tweet a minute later and said, “Happy April first.”

The actor’s post on social media came after a fan spotted Riggs in a picture that featured everyone from the show. There’s no news about the actor joining the cast for the final season. Perhaps it was just a friendly visit on set after all given that the show recently wrapped up its production. Even so, Riggs said in previous interviews that he’s open to reprising his role. It may not happen in The Walking Dead, because it’s finally coming to an end, but perhaps in some other medium.

The Walking Dead – Wraps Up Production Of Final Season

The show has finally announced that it has finished filming its scenes for the final season. The Walking Dead has been running for 12 years. After 11 seasons and 177 episodes, the highly-rated zombie production is finally coming to an end.

“Today is the big day! Filming for #TheWalkingDead is coming to an end. It’s been an incredible 12 years and we hope all the amazing cast and crew have a fantastic wrap day. #TWDFamily forever!” The Walking Dead’s official account tweeted. The post featured a group of photos taken during different times in the series.

The Walking Dead may be coming to an end but fans can still enjoy its spinoff series. The existing ones are Fear of the Walking Dead, which was recently renewed for season 8, and The Walking Dead: World Beyond.

The AMC original will have three more spinoff series that are set to air in 2022 and 2023. For starters, the Tales of the Walking Dead will have six episodes featuring standalone movies that are one hour long each.

Dab McDermott, President of AMC Networks and AMC Studios original programming said that they’re excited to present the spinoff in a different format. He likened it to the TV classics such as Black Mirror and The Twilight Zone. Fans should also look forward to a six-episode show called Isle of the Dead, featuring Maggie (Lauren Cohan) and Negan’s (Jeffrey Dean Morgan) foray in post-apocalyptic Manhattan.