The Bold And The Beautiful Spoilers: How Does Sheila Survive? – Aftermath Bends Storyline 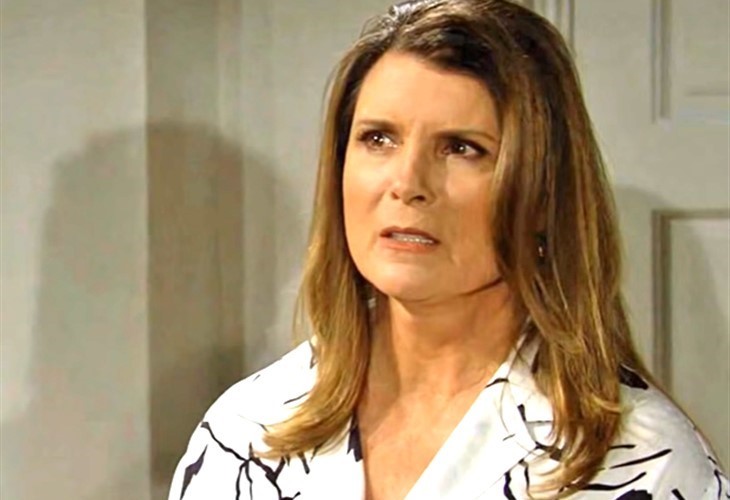 The Bold and the Beautiful spoilers document that Sheila Carter (Kimberlin Brown) shot her son. He would need to die, without reporting his birth mother, and Steffy Forrester Finnegan (Jacqueline MacInnes Wood) would also need to be killed off, for Sheila to escape punishment.

There would also need to be no surveillance cameras in the alley where Sheila used her gun, and no witnesses would need to exist, or Brown’s character would also have to eliminate that person or persons.

So, Sheila does not survive this incredibly dramatic series of scenes on B&B. But her crimes are teased to be covered for a while.

The Bold And The Beautiful Spoilers: Taylor And Ridge Impacted By Sheila Reveal – Brooke Is Restored?

Steffy was justified in being angry at Sheila. Even though Wood’s character is no Brooke fan, she, like her brother, was outraged that Sheila tricked Brooke Logan Forrester (Katherine Kelly Lang) into drinking alcohol.

It was realistic to write Thomas Forrester (Matthew Atkinson) and Steffy into disliking Sheila’s actions, even though they served to split Ridge Forrester (Thorsten Kaye) from Brooke.

Thomas was conflicted and has remained silent about what he knows. Steffy responded immediately after she overheard her brother detailing Sheila’s latest cowardly scheme.

It is fair to assert that writing John Finn Finnegan (Tanner Novlan) into the shooting scene was not as believable. As viewers recall, Steffy stopped by his office and told her husband what Sheila did.

Finn did not have time to process the sordid details, with his birth mother’s actions against Brooke seeming far-fetched. He, like the audience, questioned why Sheila would conceive of such a plan and then be able to carry it out.

So, having Steffy just so happen to catch Finn when he was not with a patient or in a meeting and laying that heavy reveal on him proved too much to take. Steffy’s later text, about meeting Sheila at Il Giordino, created the plot vehicle that allowed Finn to leave work and quickly drive to the restaurant.

Finn finding the ladies just as Sheila was pulling the trigger further suspended disbelief on B&B.

The Bold And The Beautiful Spoilers – Does Sheila Carter And Her Son Go?

If this is a murder, then Finn is done. That will be an actual crying shame, as Steffy and Finn have created a great family, and Novlan has been a superb addition to the cast.

No matter how long Sheila’s grace period lasts and whatever the outcomes for Finn and Steffy, Brown’s character is destined to either be arrested and jailed or flee town.