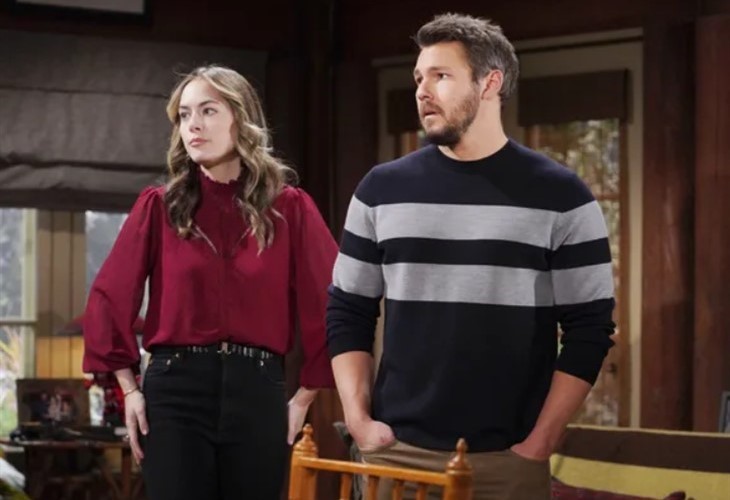 The Bold and the Beautiful spoilers document that Liam Spencer (Scott Clifton) told his wife that he had to get to the hospital after Deacon Sharpe (Sean Kanan) let everyone know the bad news at the cabin. Hope Spencer (Annika Noelle) understood and allowed her husband to leave without going with him.

‘The Bold And The Beautiful’ Spoilers – Brooke Logan Forrester (Katherine Kelly Lang) was there. So, she could have stayed with the children.

Hardcore B&B fans are right to wonder if Sheila Carter’s (Kimberlin Brown) cold-blooded murder of her son means the return to an old storyline pattern?

The Bold And The Beautiful Spoilers: Finn Shocked By Truth – Steffy Uses Weapon Against Sheila

John Finn Finnegan (Tanner Novlan) died within moments of his mother shooting him at point-blank range. She aimed her gun at Steffy Forrester Finnegan (Jacqueline MacInnes Wood) but did not hit her intended target.

Finn’s heroic efforts made Steffy a widow. Thankfully, Sheila somehow did not put an immediate life-ending shot into her daughter-in-law.

Steffy is a fighter, and once she recovers, as her Forrester family and Liam believe she will do, life will go on without Finn. As Ridge Forrester (Thorsten Kaye) said, she needs to be the music for the kids as Taylor Hayes (Krista Allen) once was.

The Bold And The Beautiful Spoilers – Hope Spencer Is Too Understanding?

It appears as though Hope has had no fear of Steffy and Liam reuniting in recent times. That makes total soapy sense because Wood’s character fell in love with Finn, they had a child, and were married.

The days of Hope and Steffy battling for Liam’s attention and affection seemingly ended through the casting of Novlan. The new character he portrayed became the needed hammer that ended the then unbreakable pull Steffy felt toward Liam.

However, the tragedy that has occurred forces Steffy on an entirely unexpected course. Unless a second shocking cast exit is ahead, which no sources confirm is happening, Steffy will need her family’s support. Liam is family.

Liam is a sensitive soul. It is natural for him to want to be by Steffy’s side, as she is not only one of his soul mates but also the mother of his daughter, Kelly Spencer (Avalon and Colette Gray).

So, Liam’s trip to the hospital is a normal, human reaction. What follows will determine if Clifton’s character, not just Wood’s, feels the pull to the past.

Steffy and Liam have a bond that did not break when he returned to Hope, per Steffy’s advisement, and secured a family with Noelle’s character. The strength of Liam and Hope’s connection will be tested during what should be an extended storyline on B&B.