The Bold And The Beautiful Spoilers: Who Brings Sheila To Justice? – Candidates Abound In LA 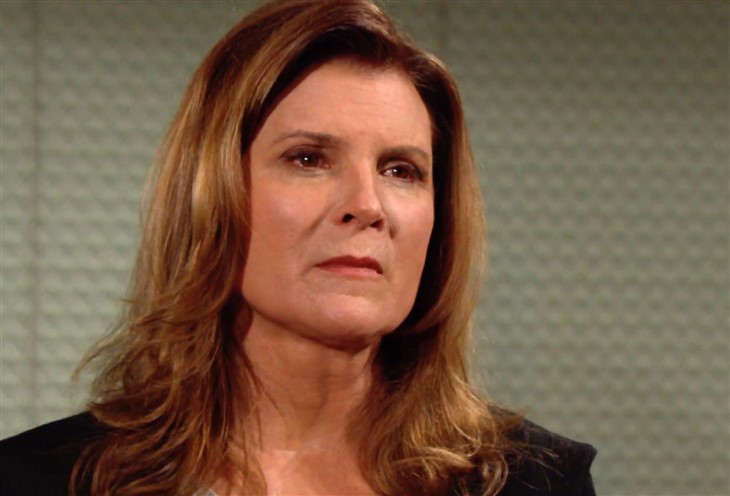 The Bold and the Beautiful spoilers document that Sheila Carter (Kimberlin Brown) can not possibly be allowed to get away with killing her son. Steffy Forrester Finnegan’s (Jacqueline MacInnes Wood) persistence must mean that she will bring Sheila to justice, right?

While the fate of Wood’s character is not yet known, it is assumed that Steffy was the only witness to Sheila’s crimes. It would not be shocking to learn that there was a camera in the alley. But if that is not true, and there were no other human beings who saw what happened, it is all on Steffy.

The Bold And The Beautiful Spoilers – Soapy Wait Ends This Summer?

Wood and her husband are expecting their third child shortly, meaning the spring that recently started. Viewers now see what appears to be the strategy.

Steffy could remain unconscious indefinitely, which would allow or has already allowed Wood to record a series of advanced scenes in the hospital bed setting. Steffy could also be moved to a special facility if her condition stabilizes and she does not regain consciousness.

Alternatively, Steffy could wake up soon and be overcome by the recalled shock of what happened. She would have to report her husband’s killer and potentially need time away from Los Angeles, California, to deal with massive grief.

B&B Spoilers – If Not Steffy Forrester Finnegan, Then Who?

Thomas Forrester (Matthew Atkinson) knows about Sheila’s alcohol trick. That knowledge will create ongoing conflicts with her, which could lead him to trip Sheila up.

Deacon Sharpe (Sean Kanan) is closest to Sheila. He thinks he broke the news to her. But the proximity and new level of friendship they now appear to share could go south in an instant if she misstates even one word about her horrible crimes.

Taylor Hayes (Krista Allen) assumed the job of Sheila’s unofficial counselor. While rejecting Sheila’s request to become her psychiatrist, due to the conflict of interest in being one of her other shooting victims, Taylor has a unique instinct and insight into this broken mind.

Any of the above characters could discover Sheila’s horror and reveal it.

The Bold And The Beautiful Spoilers – Sheila Carter’s Last Stand

It feels like great villains rarely die young. Instead, good guys like Finn are struck down in their prime.

Sheila must escape California to remain out of prison. That would happen if she learns that Steffy has awakened and does not have an opportunity to silence her forever.

Fans across the soap world, beyond B&B loyalists, would likely cheer the final demise of Sheila, based on what she did to Finn and Steffy, how she covered her tracks, and has since behaved.

But will TPTB at B&B go all the way and kill Sheila off? It is not hyperbole to say that these shows will continue to be worth the watch until a resolution is realized, hopefully by summer.