The Young And The Restless Spoilers: Trouble Blows Into Genoa City When Diane Arrives 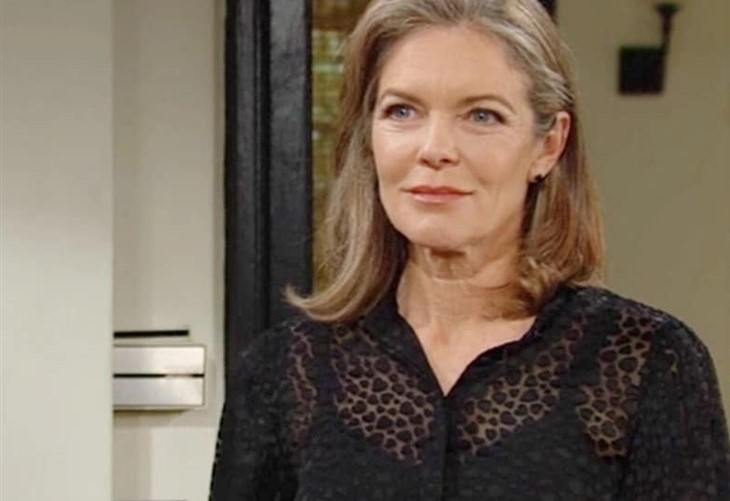 Diane also was the one who arranged for Jack to find out about his granddaughter Allie Nguyen (Kelsey Wang) through a series of clues, likely getting Allie’s phone number through the realtor she was working with, and the photo from Keemo’s box of mementoes.

Ashley Abbott, (Eileen Davidson) Traci Abbott (Beth Maitland) and Billy Abbott (Jason Thompson) are all present in the Abbott family home when Jack tells them to brace themselves, because he has some shocking news! Jack explains that Diane is alive and in Los Angeles, and was the person sending the mysterious texts, and it sends shock waves, panic, suspicion and disbelief through the family!

Viewers of The Young and The Restless will see Jack tell the story of how he found out Diane was alive, and had purchased Keemo’s house from Allie under a fake name of Taylor Jensen. Jack tells in detail how Allie was used by Diane to get him over to Los Angeles and to Keemo’s house, where he was treated to an unwelcome blast from the past finding out who the buyer really was!

Viewers of The Young and The Restless will see Jack tell his siblings how Diane orchestrated this whole trip to Los Angeles and finding out about his granddaughter Allie, just to try and get Jack to put her in touch with their son Kyle Abbott (Michael Mealor)! Jack also tells the family Diane’s story of how she faked her death and even her burial, although she didn’t give any good reason as to why she stayed in hiding for so many years, suddenly wanting to get reunited with Kyle!

The Young And The Restless Spoilers – While The Abbotts Discuss How To Best Protect Kyle Abbott, Diane Jenkins Shows Up Disguised At The Grand Phoenix

Viewers of The Young and The Restless will see the Abbotts discuss how best to protect Kyle from his cray cray monster mother, and Ashley opines that they shouldn’t even tell Kyle the truth for now.

The instinct to protect and to shield from a terrible truth is understandable, but Traci reminds her it would be best that Jack gives him the news before Diane finds Kyle behind everyone’s back – which, as viewers will recall, she already has, impersonating Ashley on the phone! Jack has thought about this a lot and agrees he needs to warn Kyle before Diane shows up on his doorstep, which he would not put past her to do!

After all, if she could find Keemo’s obituary, and purchase his house from his daughter when Keemo had changed his name to one Diane should not have known – Hao Nguyen – finding Kyle would be a piece of cake! Little do they know even as they are discussing how to keep Diane away, she’s checking into The Grand Phoenix – Phyllis Summers’ (Michelle Stafford) hotel, in disguise, and she’s staying in town indefinitely!