The Bold And The Beautiful Spoilers: Liam And Hope Fear For Steffy And Want Her To Live 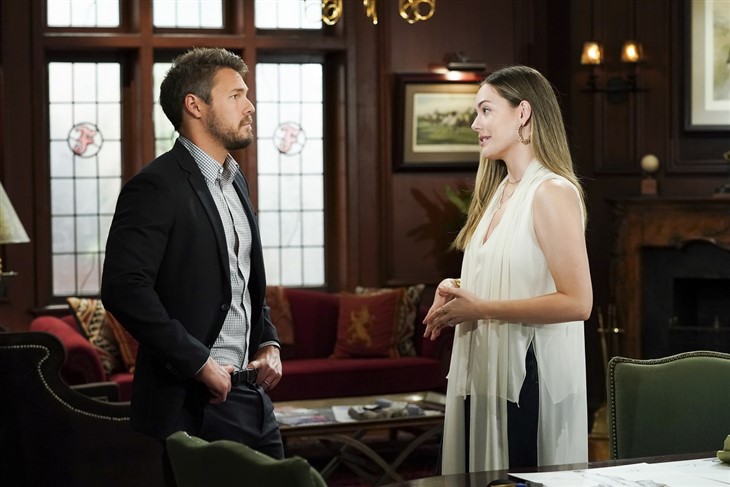 Steffy and Sheila had an argument and Sheila was going to shoot Steffy. Steffy and Sheila were shocked when Dr. John Finnegan (Tanner Novlan) was shot instead. Sheila shot Steffy and fled from the scene. Steffy and Finn were found by Deacon Sharpe (Sean Kanan) who got them help. Deacon contacted Steffy’s family and friends to come to her side. Steffy has many people who care about her and want her to make a full recovery.

Deacon knew that Liam Spencer (Scott Clifton) needed to know that Steffy had been hurt. Deacon found Brooke and his daughter Hope Spencer (Annika Noelle) with Liam when he had to tell them that Steffy was in the hospital and Finn was dead. Liam and Hope were stunned by the news. Hope encouraged Liam to go to help Steffy.

Liam and Steffy share a complex romantic past. Liam is the father of Steffy’s daughter Kelly Spencer (Colette and Avalon Gray). Steffy believed at one point that Liam was the father of her son Hayes Finnegan (Piper Harriot) but her brother Thomas Forrester (Matthew Atkinson) found out that Finn was Hayes’ father. Liam has been trying to encourage Steffy to fight for her life. Liam told Steffy that he still loves her and does not want to lose her. Liam hopes that Dr. Bridget Forrester (Ashley Jones) will tell him that Steffy is on the road to recovery.

Hope and Steffy have been rivals in the past because they have both wanted to be with Liam. Hope and Steffy had to find a way to put their feelings for Liam aside to become friends. Hope is determined to help Steffy and does not want Steffy to give up on life. Hope knows that Steffy is a devoted mother and that Hayes and Kelly need her. Steffy had been a mother to Hope’s daughter Beth Spencer (Madeline Valdez and River Davidson) for a time.

Steffy had adopted Beth with the help of her mother Dr. Taylor Hayes (Krista Allen). Steffy and Taylor did not know at the time of the adoption that Beth was really Hope and Liam’s daughter. Steffy found the courage to give Beth back to Hope and Liam when she found out the truth. Hope knows that Steffy is strong and can fight her way back to the ones that love her.

The Bold and the Beautiful Liam and Hope want Steffy to survive and be able to move on. Hope will want Steffy to be able to be a part of Hayes and Kelly’s lives. Can Hope find a way to help Steffy so that Hayes and Kelly will not lose her? Liam still has strong feelings for Steffy and will want to support her. Can Liam find a way to help Steffy not give up on living her life and face her tragic loss? Be sure to catch up on everything happening with B&B right now. Come back here often for The Bold and the Beautiful spoilers, news, and updates.