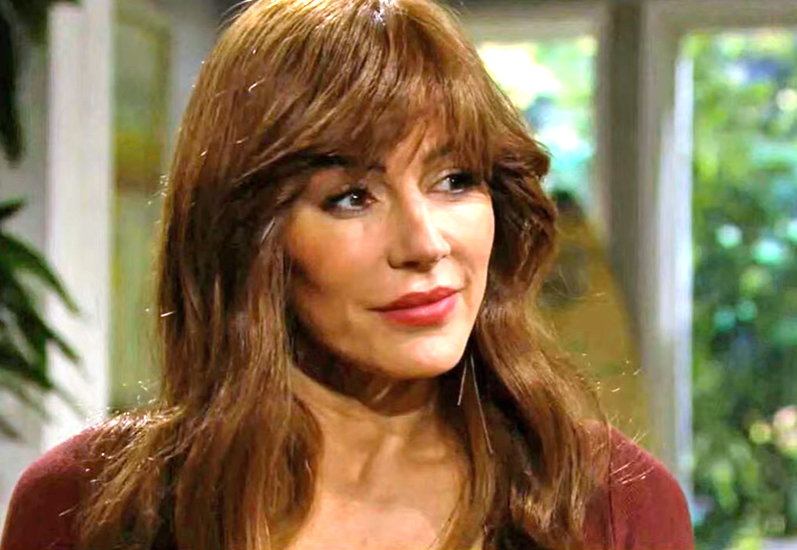 The Bold and the Beautiful spoilers document that Taylor Hayes (Krista Allen) is a decorated psychiatrist. While that distinction is earned, it is not allowing her to see Sheila Carter (Kimberlin Brown) clearly.

Taylor’s heart is in the right place, as some people can embrace redemption. But Sheila is not one of those people in this soap world.

The Bold And The Beautiful Spoilers: Bridget Fights For Steffy’s Life

If Taylor listened to her daughter, the current terrible predicament would likely not have happened, or it would not have played out exactly as it did.

Viewers recall that Taylor drove the decision to have Sheila at the cliff house on New Year’s Eve. That opened the daytime door to B&B’s greatest villain of all time.

As episodes built toward the death of John Finn Finnegan (Tanner Novlan), Taylor never suspected that Sheila was capable of the violence Steffy and the viewers witnessed in that fateful alley.

Taylor is teased to prevent Sheila from considering a jump off a rooftop. Sheila is the ultimate drama queen. So, who knows if she would have taken that leap, as Brown’s character seeks self-preservation more than most human beings.

Yet, the experience will cause Taylor to feel even more sorry for her fellow grandmother. The loss of Finn has increased Taylor’s feelings of compassion, with Sheila benefiting in the short term.

Coming episodes will see Taylor become Sheila’s champion, which would not be the cast if Allen’s character knew the truth about Finn’s death and Steffy’s bullet wound.

The Bold And The Beautiful Spoilers – Sheila Carter Benefits From Badness

So Steffy lived. Now, what to do? That was Sheila’s driving concern, but a dramatic shift in circumstances alters the immediacy of her plans.

Viewers know that Sheila wants to silence Steffy forever. But teasers indicate that will not be necessary, as Wood’s character suffers memory loss.

The above means that Steffy will not recall that Sheila killed Finn and twice tried to kill her. Of course, Steffy’s selective amnesia, caused by the trauma she endured, will not continue indefinitely. But while it does, Sheila will have the opportunity to bond with her new best friend, Taylor on B&B.