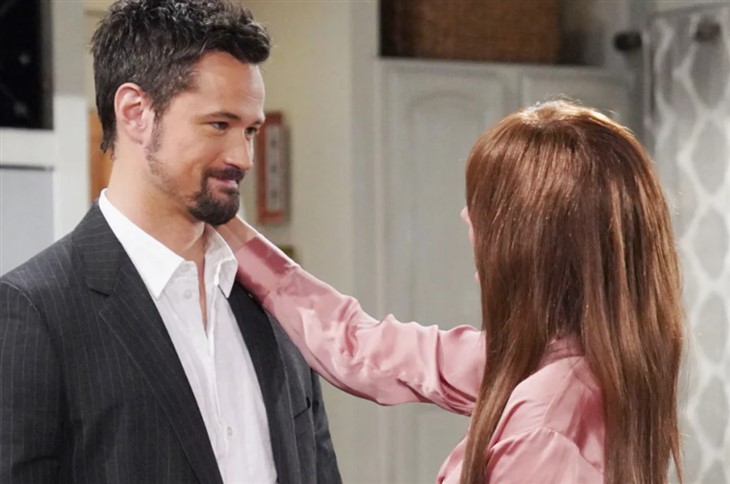 The Bold and the Beautiful spoilers document that Thomas Forrester (Matthew Atkinson) and his mother missed what Sheila Carter (Kimberlin Brown) did. That happened before B&B’s greatest of all-time villain headed for the hospital rooftop.

Sheila was talking about what Steffy Forrester Finnegan (Jacqueline MacInnes Wood) would say about the shooting when she woke up. That could imply Steffy knew something about the shooter or was shot after John Finn Finnegan (Tanner Novlan) was shot.

Of course, the above analysis is a subjective interpretation. But analyzing dialogue is what soap characters do. So, why didn’t Thomas, Taylor Hayes (Krista Allen), or both press Sheila hard on that point?

Sheila is fearful of being caught. If Steffy recovers, she will tell everyone what happened. That will be it for Sheila unless she has already skipped town.

Fans know that Wood’s character is teased to have memory loss. So, that will give Sheila an unknown amount of time to dangle in the daytime wind.

Mixed with Sheila’s fear, is her regret at having shot and killed Finn. She intended to do that to Steffy and has displayed no remorse for pumping that second shot into her chest.

At this point in the plot, Sheila only regrets that Steffy survived the shooting. She remains in critical condition, which is fueling Sheila’s additional angst.

Thomas naturally wondered if Sheila shot Finn and his sister. He was speculating along those dark lines because Sheila admitted providing Brooke Logan Forrester (Katherine Kelly Lang) with alcohol.

However, Thomas was moved by Sheila‘s seeming expression of disgust at the animal who was the shooter. She convinced him that someone else was responsible, effectively deflecting suspicion from her big, bold face.

Taylor is far too close to this situation to see who Sheila is underneath. Allen’s character came to feel sorry for Finn’s mother in recent months, wanting to give Sheila a chance to prove her redemption claims.

Sheila is not redeemed at all. As she said to herself, this is the worst thing she has ever done.

Taylor will deepen her link to Sheila, developing a type of friendship with her. But viewers know that a daytime day of reckoning will arrive in the future, with Sheila’s horror show story being eventually exposed.