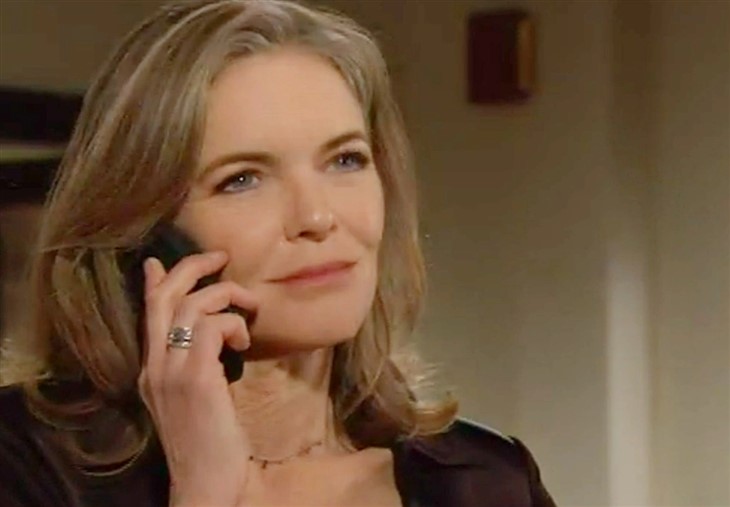 The Young and the Restless spoilers document that Diane Jenkins (Susan Walters) is not allowing Jack Abbott (Peter Bergman) to call the shots. Despite Kyle Abbott’s (Michael Mealor) psyche being endangered if the news of her existence is not presented properly, Diane is forging ahead with her plan.

Taking a flight from Los Angeles, California, to Genoa City, Wisconsin, means Diane wants to push the issue. She did not disagree with Jack’s demand that Kyle is allowed to decide how to handle the reveal about his mother not being dead. But, in classic Diane fashion, she did not approve of what Jack offered either.

What type of mother would cause her son to grieve her death as a child? A bad one.

What type of person would compliment Jack and the Abbott family as good people while adding a caveat about them being gatekeepers. Diane told Allie Nguyen (Kelsey Wang) that she could get along with the Abbott’s if they let her in.

Allie did not know that the Abbott family uniquely treated Diane because of how she dealt with Jack. She was rightfully distrusted, which is why she is trying to paint the Abbott’s as clannish.

Phyllis Summers (Michelle Stafford) and Jack’s connection is obvious, as Allie noted. They care about each other and have what appears to be more than a friendship to any observer.

Stafford and Walter’s characters were shown in various retrospective scenes that refreshed devoted viewers’ minds and provided needed intel to newer viewers. Phyllis and Diane detest each other, with the origin source of their feelings centering on Jack.

Phyllis is determined not to allow Diane to hurt Jack again. Red knows that there is no stopping Diane. But she can be neutralized, as was true in the past, through various soapy measures.

It was touching to see Allie and Jack hug at the outdoor restaurant that served as a multiple-time meeting place while Bergman’s character was in LA.

The Young And The Restless Spoilers: Trouble Blows Into Genoa City When Diane Arrives https://t.co/0utotN7wLP pic.twitter.com/QyHk9ekXJa

Diane has called Jack a good man and offered a form of respect for his family. Allie benefited from learning an outsider’s perspective on her late father’s paternal family members.

Developments and coming Kyle-related drama imply that Allie and Phyllis will have Jack’s back as Diane lights up the sky in GC this spring on Y&R.