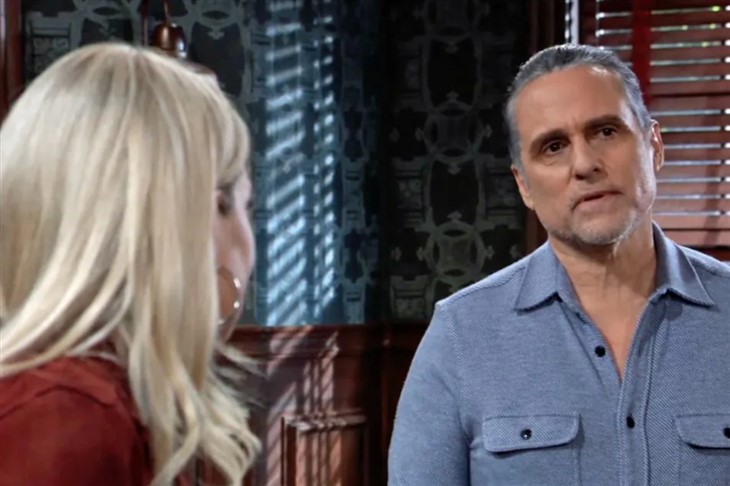 General Hospital viewers will recall that Nina really wanted to settle the question of visitation with her grandson with Michael Corinthos (Chad Duell) and Willow Tait, (Katelyn MacMullen) but it didn’t work out that way! Michael and Willow both were dead set against Nina even having supervised visitation, which would have ensured perfect safety for Wiley, but undoubtedly Sonny’s being caught in bed with Nina by Carly Corinthos (Laura Wright) sealed that deal!

General Hospital viewers will remember that Carly was late for a last ditch effort by Sonny to win her back and he was so sure she stood him up he took Nina to bed aboard the Haunted Star instead! Scott Baldwin, (Kin Shriner) has already warned her things could get really ugly in court, with Michael bringing up Nina’s worst moments, including her inducing labor in Ava Cassadine, then Ava Jerome (Maura West) and taking newborn Avery Jerome-Corinthos (Ava and Grace Scarola) on the run to Canada!

Presumably, Michael has a publisher since he is running Aurora Media, and they must have a newspaper or magazine or website they can put it in; he promises it’ll be viral! Michael is fighting against Nina getting visitation as if she were fighting for full custody, but he is probably thinking that if he gives her an inch she’ll take a mile and fight for that next! After all, Nina has longed for her own child for years and was devastated when she found out too late that Wiley’s mother, Nelle Benson (Chloe Lanier) was her long-lost daughter!

General Hospital viewers know that Nina needs a secret weapon to blast away all the negative and nasty evidence that Michael plans to bring up in the visitation hearing since she cannot deny any of it – there is plenty of documentation considering he was there! General Hospital viewers will remember Michael changed his name back to Quartermaine at the time because he was so angry at Sonny for taking out his birth father, AJ Quartermaine (Sean Kanan). Michael was with Kiki Jerome (Hayley Erin) at the time, and they took temporary custody of Avery, with Ava being temporarily out of the picture.

But Scott calls Sonny as a character witness for Nina, and he won’t have a choice, he’ll have to take the stand; which in effect will be a choice between Michael and Wiley and Nina! Attorney Diane Miller (Carolyn Hennesy) will turn against Sonny and bring some solid evidence against Nina; so this will be something Sonny may not be able to fix!