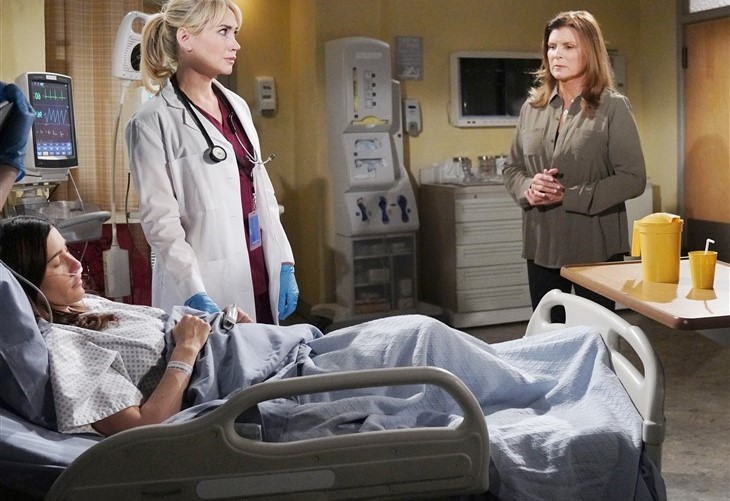 The Bold and the Beautiful spoilers document that Steffy Forrester Finnegan (Jacqueline MacInnes Wood) is awake. So, she likely is not going to die unless Sheila Carter (Kimberlin Brown) takes matters into her own hands, as she tried to do in the alley after accidentally killing John Finn Finnegan (Tanner Novlan).

However, Steffy is teased to be more than groggy. She has suffered a form of memory loss that is based on the physical and mental trauma she suffered.

That soapy outcome creates an opening for Sheila but will stir trouble for Steffy’s family.

Losing Novlan is a blow to B&B. But this show can survive because of its top-actor talent, including Wood.

Finn quickly became a beloved character. What was not to like about the guy? He was good-natured, loved Steffy, became Hayes Forrester Finnegan’s (Samantha Worden and Piper Harriet) father, kept Sheila at bay until the end, and was not Liam Spencer (Scott Clifton).

Wood is one of the lead actors in this show. She could have taken time away from daytime with the birth of her third child but apparently has decided not to. That is good news for fans of great soap.

Steffy is teased not to recall what happened to Finn. That could mean she will block out that entire period of her life, which would put her back into Liam-land.

Devoted fans were nearly unanimous in wanting to see the end of the Steffy-Liam-Hope Spencer (Annika Noelle) triangle. That conflict was good once upon a time. But it was played out, making the arrival of Finn an embraced choice.

Fans will wonder if the above scenario plays out if that would eventually fuel an actual Steffy-Liam reboot. It is too soon to tell, with the next episodes being crucial to the direction Wood’s character will take these next months.

The Bold And The Beautiful Spoilers – Jacqueline MacInnes Wood’s Timeline

Wood’s Instagram page has been a solid source for baby information in the past. The same is true today.

Fans can follow that page for updates and the news of the birth of her and her husband’s third child this spring. It could be that Wood has already recorded a series of advanced scenes that will keep Steffy in recovery shots for an extended period.

But Steffy will eventually regain her memory, as Sheila fears. So, the fans want this drama resolved as soon as possible, which pits them against Sheila’s hope that it never is.