The Bold And The Beautiful Spoilers: Will The Police Believe Steffy? – No Proof Of Sheila’s Crime 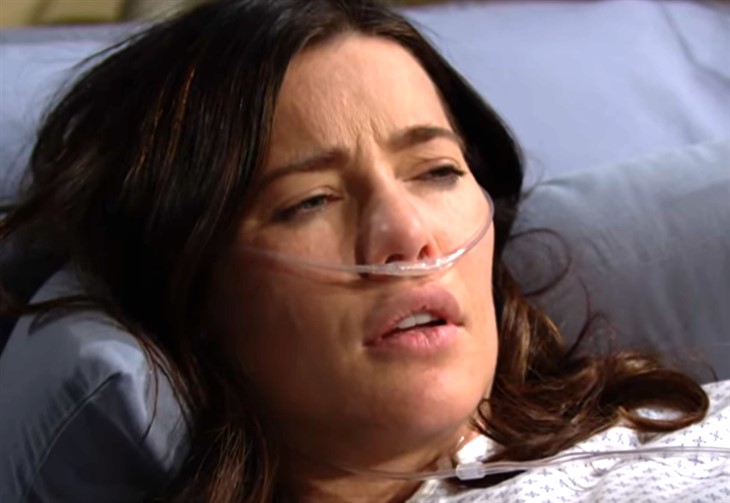 The Bold and the Beautiful spoilers document that Steffy Forrester Finnegan’s (Jacqueline MacInnes Wood) request for water was not followed by identifying Sheila Carter (Kimberlin Brown) as her husband’s killer and the woman who shot her. The soapy stretch appears to be in play, as hardcore fans assumed.

Steffy can not tag Sheila as her shooter so soon after the horrific shootings. If she did, then Brown’s character would either be arrested and jailed or she would flee the authorities.

So, what are the plausible roads that may lie ahead on B&B?

The Bold and the Beautiful Spoilers: Carter Pushes Paris Away And Longs For Quinn

Readers of this comprehensive site know that Wood and her husband are expecting their third child this spring. Reasonable speculation and a review of Wood’s social media pages imply that she is due to deliver very soon.

So, assuming that Wood has recorded advanced scenes, Steffy could be sporadically seen on the show through the spring. Her anticipated maternity leave can be paired with Steffy’s road to recovery.

Bridget Forrester’s (Ashley Jones) diagnosis has been positive, as Steffy is physically resilient. But it could take months for her to regain a clear memory of the shooting. That would be paired with whenever Wood can return to the set following the birth of her expectant baby and some needed time off.

How believable would it be to have Steffy not recall how her husband died and why she was hospitalized if it were this time next year and Sheila was still safe?

No loyal fan would ever accept that soapy wool being pulled over their eyes. So, it will not happen.

To project a late-spring or summer reveal is realistic. That would allow Wood’s character to rehab at a facility her loved ones would reference and visit on occasion.

The Bold And The Beautiful Spoilers – Where Is The Evidence?

Viewers have been told there were no witnesses and no cameras. No cameras, okay. No witnesses. Maybe.

A witness could have seen or heard what happened, and even if no one eye-witnessed what occurred, a person could have seen Sheila walking in that area shortly after the shooting.

But if no one can place Sheila at or near the scene of the crime, some piece of physical evidence linking her to John Finn Finnegan (Tanner Novlan). As viewers recall, she kissed her deceased son on the lips before leaving him and Steffy in the alley where she thought they were dead.

At least a trace of DNA evidence should exist. So, the police do not have to believe Steffy. They need to follow up on what she says and press for answers. Otherwise, a confession or another outcome will need to result for Sheila to be arrested, tried, convicted, and jailed for these crimes.