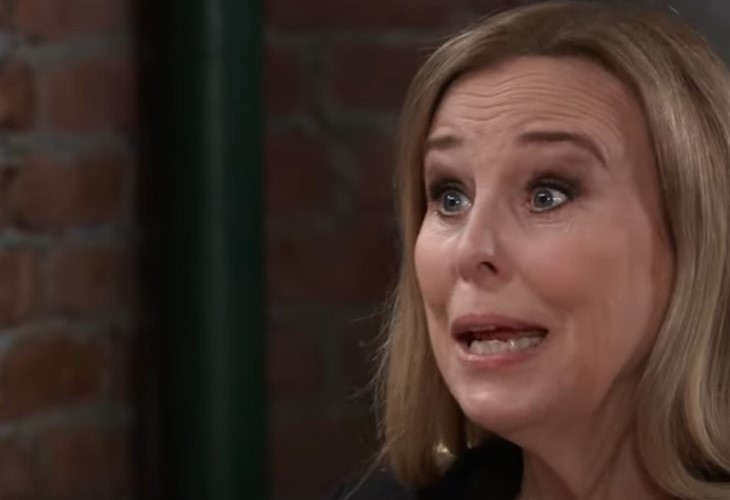 General Hospital spoilers and updates tease that Laura Collins (Genie Francis) will talk about her latest suspicions with Felicia Scorpio (Kristina Wagner) after hearing what happened on Felicia and Anna Devane’s (Finola Hughes) recent trip to French Polynesia in an upcoming episode of General Hospital!

General Hospital viewers will recall that Felicia saw a French man in a military uniform with Jennifer Smith (Holly Gagnier) from a distance, and from Anna, she learned that Jennifer had a French submarine captain in her hotel room. General Hospital viewers can expect that Anna and Felicia talked about the less privileged information on the case, and Anna told her Jennifer claimed the Frenchman planted the Ice Princess diamond in her hotel safe!

Even though Anna was not on a WSB case, she found there was already a WSB team there including someone she knew, so they let her join in to bust Jennifer and take her in and retrieve the Ice Princess diamond! Anna was rather surprised that someone didn’t notify her of the op, considering she and Robert Scorpio (Tristan Rogers) were agents for many years, close friends of Luke Spencer (Anthony Geary) and Anna technically is still an agent! Felicia and Laura talk about all this and Laura has some theories about the case!

General Hospital viewers will remember that Laura already heard from Anna, as did Robert, about what Anna found in French Polynesia, and Laura has her suspicions about the case, and how the Ice Princess wound up in Jennifer’s safe. General Hospital viewers will recall that Anna and Felicia were going to a black market auction and Anna used some money Duke Lavery (Ian Buchanan) left her to gain entrance, of course it turned out she didn’t go because the WSB agents had cancelled it.

Anna, Felicia and Laura are all intrigued about who the French Submarine Captain was and why he was there – however, the supposed Ice Princess has not come back from the verification process so they don’t know if it’s a fake yet. There have been at least two fakes already, one sent to Lulu Spencer (most recently Emme Rylan) about ten years ago and Tracy Quartermaine (Jane Elliot) found out the one she had was a fake! Laura thinks that sounds like a Cassadine move to draw attention away from Victor Cassadine (Charles Shaughnessy) and the suspicions surrounding his role in Luke’s death!

General Hospital Spoilers – But What About That Frenchman?

General Hospital viewers will also see there are suspicions about who exactly “Captain Francois Olivier” really was and what his part was in putting the Ice Princess – if it’s the real one – in Jennifer’s safe! General Hospital viewers saw Anna comment to Valentin Cassadine (James Patrick Stuart) that he looked awfully tan for having been convalescing from a blood infection, and Anna, Laura and Felicia all know he speaks French! Felicia notes that the French military man could have looked like Valentin from the back – but she couldn’t get a good description of his face. The Ice Princess plant maneuver definitely was a Cassadine move – now the question is, why?