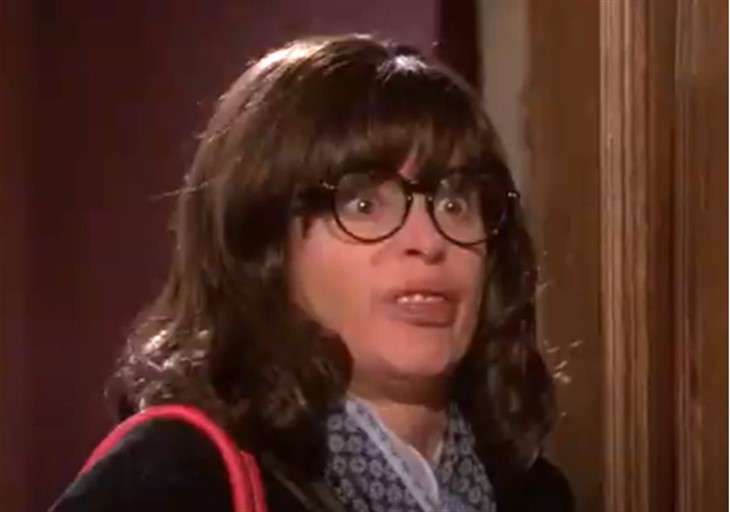 Days of Our Lives spoilers and updates tease that Susan Banks (Stacy Haiduk) will have a premonition about Johnny DiMera (Carson Boatman) and will try to convince EJ DiMera (Dan Feurreriegel) he’s in danger in an upcoming episode of Days of Our Lives!

Days Of Our Lives Spoilers – Johnny DiMera Is In The DiMera Crypt, In Danger From The Devil

Days of Our Lives viewers will recall that Johnny is in the DiMera crypt, secured by the same set of stocks as John Black (Drake Hogestyn) was before Christmas. Days of Our Lives viewers will remember that back then the devil was in Marlena Evans (Deidre Hall) and imprisoned not only John, but Susan, after turning her into a black cat! Susan was grievously injured when MarDevil tried to force her to kill John, turning the knife on herself instead – and she has a premonition that Johnny is in danger as he, in desperation, cries out to her from the crypt!

Now the devil has jumped from Johnny into his sister Allie Horton (Lindsay Arnold) and not only has she imprisoned him in the crypt like Marlena did John, but she’s raised Andre DiMera (Thaao Penghlis) to torment him and to keep an eye on him! Andre has orders from satan himself, who he calls “Mephistopheles” to keep Johnny in line!

Days of Our Lives viewers will recall that Susan hasn’t had the best of track records lately with her premonitions, but that is mainly because Johnny DiDevil made her forget she knew when the devil was in him! Days of Our Lives viewers can understand why EJ may be hesitant to believe his mother’s latest premonition when he had done prison time because she failed to see the devil was in Belle Brady (Martha Madison)!

But then, that was also a trick from when the devil was in Johnny; he went into Belle just long enough to cause a lot of confusion and to throw everyone off his track! But Susan will keep at it and she won’t stop until EJ takes her seriously; the only problem is, like with Ciara Brady Weston (Victoria Konefal) when she was presumed dead, she doesn’t have detailed details, only visions!  Only when Johnny is finally found will her visions really make any sense, and in the meantime all she can tell EJ is Johnny is in danger and he’s calling out to her!

Days Of Our Lives Spoilers: Showdown In The Horton Town Square – TR Pulls A Gun On Abe! https://t.co/MjuPo21ROQ pic.twitter.com/yhESKqqvu4

Days of Our Lives spoilers also tease that zombie Andre will toy with Ben Weston (Robert Scott Wilson) after Susan tries to convince EJ of her premonition, and he also toys with Johnny! Days of Our Lives viewers will recall, however that the devil has his eye on Baby Weston and in a recent Days of Our Lives preview, it shows that AllieDevil will help Ciara give birth while she cries out for Ben!

Since that scene is shown to happen on Friday, April 29 and Susan tries to convince EJ on Thursday, April 28 it makes sense that Susan may not be able to get anywhere with EJ, and she’ll call on Ben for his help! The trouble is, AllieDevil has Andre working for her and she’ll have him delay Ben as much as possible so she can make off with the baby and Johnny’s the only one who knows for sure that the devil is in her!