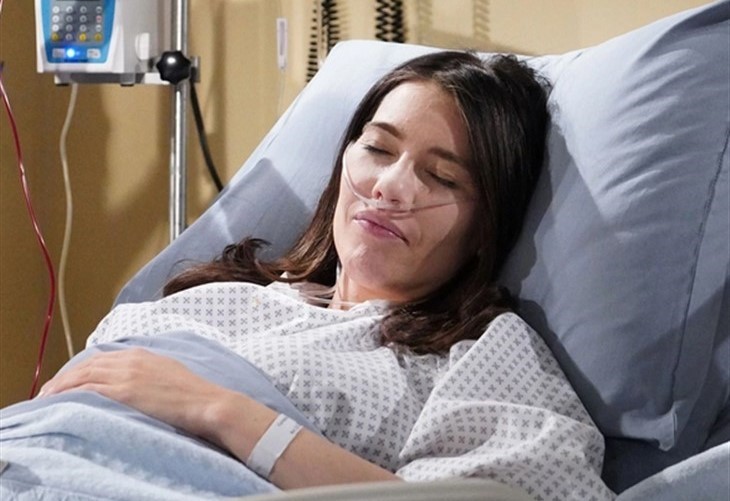 The Bold and the Beautiful spoilers document that Steffy Forrester Finnegan (Jacqueline MacInnes Wood) can not recall what happened after she followed Sheila Carter (Kimberlin Brown) from Il Giordino’s bar to the alley behind the popular and now infamous restaurant. But the woman who murdered Steffy’s husband knows every terrible detail about that horrible night.

Thankfully for Sheila, Steffy has no clear memory of the first shot. That was the one that hit John Finn Finnegan (Tanner Novlan) on the right side of his chest. While Sheila did not strike his heart, which would have killed him instantly, her inadvertent shot killed her son.

The second shot Sheila fired hit her mark. But fans are right to wonder if it is believable that Sheila allowed the only witness to her unconscionable crime to continue breathing in that alley.

The Bold And The Beautiful Spoilers:  Hope Gives Steffy A Gentle Reality Check, But It Only Confuses Her

The Bold And The Beautiful Spoilers – Shaken By Daytime Reality

Is it plausible to believe Sheila was so shaken by the realization she unintentionally killed her son that she was not thinking straight? Maybe.

As devoted fans recall, Sheila’s reaction to seeing Finn lying on that trash bag was guilt. She wondered aloud why he was in the alley while Steffy began to call for help. Of course that call was never completed.

However, after Sheila pumped a bullet into Steffy, she morphed into cover-up mode. Sheila took various items off her son and daughter-in-law to make the scene look like a violent robbery.

Steffy genuinely believes that she is married to Liam Spencer (Scott Clifton). Yes, she is in self-protect mode too.

Liam understands that Steffy is in such a fragile mental and physical state that he needs to go along with the fantasy that they are married. Of course, the truth will come out as this plot unfolds.

Sheila must believe that this gift reprieve is temporary. The implication is that she needs to fix the problem.

Once upon a soapy time, Sheila was a practicing nurse. Viewers last saw her in scrubs earlier this year when she visited Finn at his office during an unexpected visit.

There are many ways that a devious mind could approach the Steffy problem as Sheila sees it. A properly placed pillow, with the nurse station alert button being flipped off, is one. Other options would involve the insertion of a certain medicine into the tube that is currently connected to Steffy.

The Bold and the Beautiful Spoilers: Jacqueline MacInnes Wood Opens Up About Finn’s Death #bb #boldandbeautifulhttps://t.co/1A0QrFojUj

Pledging to help others live is what legitimate nurses do. But Sheila never was that. No, she killed her father decades ago and killed her son in modern times. She does not need to share grief with Steffy.

Sheila needs to find a way to silence her on B&B. If she does not, Steffy’s testimony will put Sheila in a jail cell, where she belongs and should never have been allowed to leave.