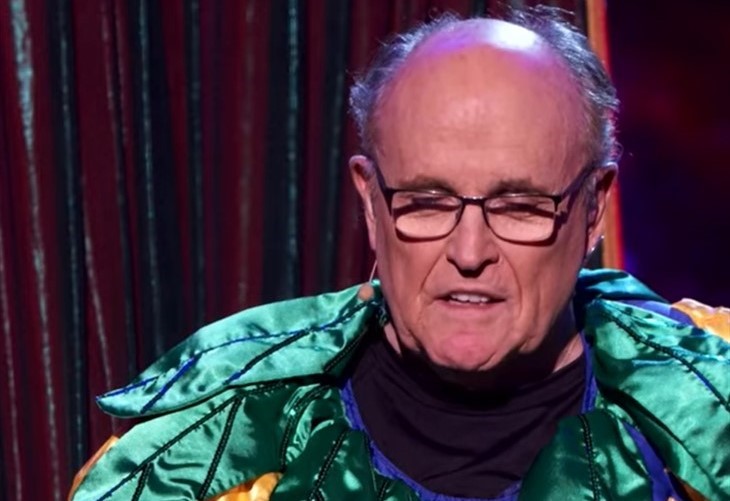 The Masked Singer spoilers emerged months ago about Rudy Giuliani appearing. Well, the leaks now got shown on the show, despite almost everyone knowing about it ages ago. Of course, folks had a lot to say about the once-upon-a-time hero of the USA. It came after he was unveiled as the Jack In The Box who belted out Bad To The Bone.

About 21 years ago, Rudy was feted and praised for his amazing job after the Twin Towers collapsed in New York. Quickly, the Mayor brought order to chaos, hope, dedication, and compassion in the wake of the shocking incident that left thousands of people dead and injured. Well, those days are long gone and some people only see the trainwreck that arrived in his life since then.

Judging by the comments about The Masked Singer this week, young fans might not even know that the man behind the mask once had soaring popularity. Well, he committed the social crime of trying to help to prove that there was election fraud in 2020. So, plenty of people loved that Judge Ken Jeong walked out.

The Masked Singer – Fans React To Rudy On The Show

The news arrived on Twitter and within mere hours, thousands of comments arrived about Rudy. Andrew Kaczynski shared the news, and he said on Twitter, “Rudy Giuliani sings “Bad to the Bone” on Masked Singer as host @kenjeong leaves saying, “I’m done.”

The Masked Singer fans seem seriously unhappy. One of them, @Trying4ChangeNH replied, “I flipped through the channels and just happened to catch the costume. I knew immediately it was him. I’m still disgusted that he was allowed on this. I haven’t watched an episode this season and even though he’s finally done I won’t watch the entire season.”

The Masked Singer – An Old Man Tired Of Taking The Heat?

The Masked Singer revealed that when Nick Cannon asked Rudy why he entered the show, he sounded unhappy. Firstly, he spoke about showing his grandchild that they could achieve anything. But then he said, “It just seemed like it would be fun, [as] I don’t get to have a lot of fun.”

Well, old, tired, and vilified doesn’t mean people hold back with their criticism. Many comments came including this one by @NoBiggety: “Kudos to Ken Jeong!!! Nothing but 💕💕 for ya!!! Rudy – I don’t need to ever see him unless he’s being arrested! #themasksinger Nick Cannon you ducked up with this one!!!!”

Clearly, it was a big “Biggety” in the life of that critic.

However, not everyone slammed Rudy or praised Ken Jeong. One commenter wrote, “Typical response when someone who lacks maturity can’t even do their job because of a political disagreement. This is why as a nation we’re stuck in the quagmire.”