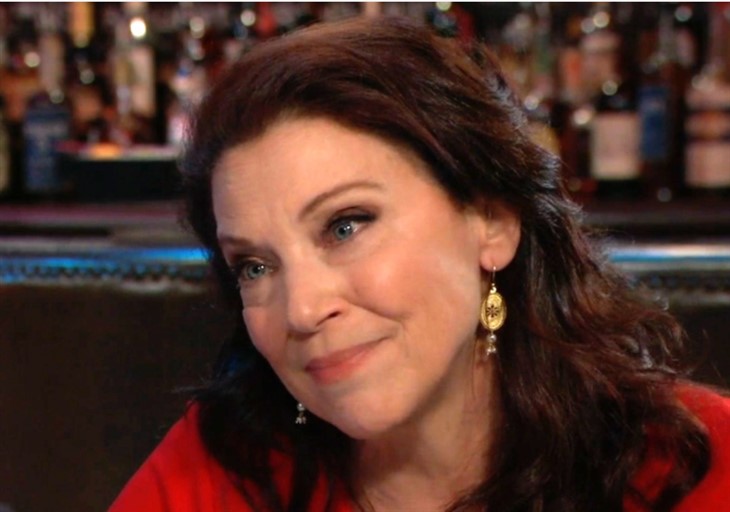 General Hospital (GH) spoilers and updates tease Dr. Liesl Obrecht (Kathleen Gati) wants to know what is going on with her loved ones. Liesl has been concerned about her daughter Dr. Britt Westbourne (Kelly Thiebaud) and her niece Nina Reeves (Cynthia Watros). Liesl knows that they have been dealing with different challenges in their personal lives. Liesl has found love with Scott Baldwin (Kin Shriner) and wants Nina and Britt to have love in their lives. Liesl believes that Britt and Nina will tell her what is going on with their lives if they spend time together.

Liesl has wanted Britt to find new love. Britt thought that she was going to have a future with Jason Morgan (Steve Burton). Britt was devastated when she lost Jason and has been trying to move on without him. Liesl believed that Britt should use an online dating service to find a new love. Britt was reluctant to use the online dating service but decided to get her best friend Brad Cooper (Parry Shen) to help her to fill out the form to find a potential match. Britt was hoping to meet her first match but he did not come.

Britt ended up spending time with Drew Cain (Cameron Mathison). Britt was surprised when Maxie Jones (Kirsten Storms) and Damian Spinelli (Bradford Anderson) thought that she was on a date with Drew. Britt may tell Liesl that she went to her first date but it did not end well. Liesl will be excited that Britt is using the online service but she will be disappointed that Britt did not get to have her first date. Liesl will encourage Britt to meet her other potential matches.

GH Spoilers – Dr. Liesl Obrecht Hopes That Nina Reeves Will Get What She Wants

Liesl knows that Nina has been having trouble getting to be in her grandson Wiley Quartermaine-Corinthos’ (Viron Weaver) life. Nina believes that she needs to take Wiley’s parents Michael Corinthos (Chad Duell) and Willow Tait (Katelyn MacMullen) to court to get visitation rights. Nina has asked Scott to help her with her case. Nina has been getting closer to Sonny Corinthos (Maurice Benard). Nina has helped Sonny deal with his divorce from Carly Corinthos (Laura Wright) and other problems that he is having.

Nina and Sonny had been involved in a robbery attempt at Charlie’s. Nina and Sonny were saved by Brando Corbin (Johnny Wactor). Nina wants Sonny to be safe because there could be a threat to his mafia organization. Nina is determined to stand by Sonny and help him. Liesl knows that Nina has developed feelings for Sonny. Liesl wants Nina to be with Sonny if he is the one that she wants in her life.

General Hospital Liesl hopes that she can help Nina and Britt to figure out what is going to make them happy. Liesl believes that if Nina and Britt can have a night off from their worries that it will help them to decide what they want to do with their lives. Liesl hopes that Britt will find new love by using the online dating service. Will Britt find her new love because Liesl helped her get on the online dating service? Liesl wants Nina to get to be a grandmother to Wiley. Liesl is not sure if Sonny is the right man for Nina but she wants to show her support for Nina. Will Nina get the help that she needs from Liesl in order to be in Wiley and Sonny’s lives?