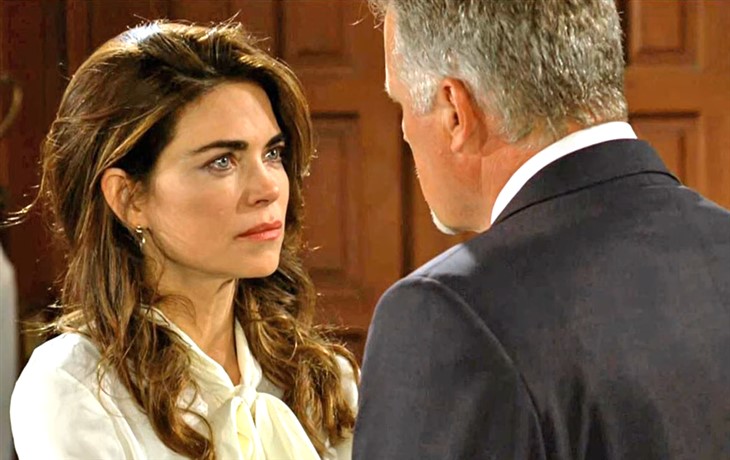 The Young and the Restless (Y&R) spoilers document that Victoria Newman Locke (Amelia Heinle) is conflicted. The betrayal of trust her husband confirmed overshadows the connection they created. But a soapy development gives this couple a realistic chance to revive.

Of course, one could term the potential of Victoria and Ashland Locke (Robert Newman) getting back together as surviving rather than reviving. They survived the three-vehicle car crash that ended the life of Rey Rosales (Jordi Vilasuso).

Ashland’s heroic efforts to save Victoria were purely selfless and appear to prove his claim that he fell in love with her while developing the scheme to merge his company with Newman Enterprises.

The Young And The Restless Spoilers – More Questions Must Be Asked

Victoria is meticulous. So, it is fair for her to ask a series of pointed, follow-up questions.

She needs to know exactly when he realized that love, rather than a thirst for power, what occupying his mind because the time frame of Ashland’s claim is sketchy.

As viewers recall, the merger was realized last early last fall. So, Ashland could have been developing his feelings during that time or did so after each side’s attorneys filed the necessary paperwork, which produced Newman-Locke.

It does seem like Ashland has fallen in love with Victoria. Devoted viewers sense he was telling the truth before he confirmed the horrible cancer lie.

But can Victoria allow herself to trust Ashland again even if she accepts what he is saying?

Ashland’s Lockeness Monster persona appeared to be part of his past. Victoria also rationalized that Tara Locke’s (Elizabeth Leiner) paternity betrayal hit Ashland (who was then played by Richard Burgi) hard. The end of that marriage allowed Victoria to greenlight a relationship with the character Newman now plays.

Nikki Newman (Melody Thomas Scott) endured a tortuous nightmare after believing that she killed Diane Jenkins (as then played by Maura West) when Kyle Abbott (as now played by Michael Mealor) was just a boy in soap-time. In real-time, Diane was believed to have been killed by Nikki in self-defense in 2011.

The Young And The Restless Spoilers: Victoria’s Burning Car, Saved By The Enemy?https://t.co/sEd3zCdLxa#YR #TheYoungandtheRestless

Diane (as now played by Susan Walters, who played this character from 2001 through 2010) voluntarily revealed her fake death ruse. She chose Jack Abbott (Peter Bergman) as the first to see her comeback because he is Kyle’s father.

The effect of Diane’s unexpected return will serve to distract Nikki and Victor Newman (Eric Braeden). That diversion should give Ashland the time and space he needs to work on Victoria. But the annulled Mrs. Newman Locke likely will not be easily persuaded.