The Bold And The Beautiful Spoilers: Steffy Deals With Finn’s Death – Sheila Takes Another Shot 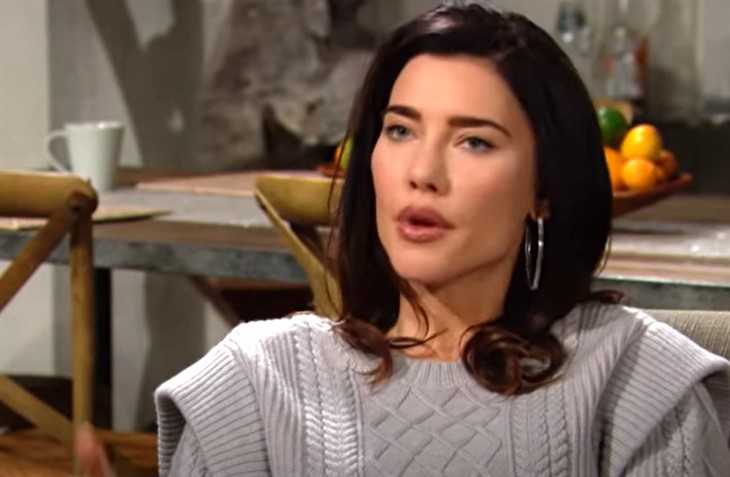 The Bold and the Beautiful spoilers document that Steffy Forrester Finnegan (Jacqueline MacInnes Wood) was shot into an unconscious state. Thankfully, she survived the bullet that the unjailed criminal, Sheila Carter (Kimberlin Brown), pumped into her.

Viewers were horrified when John Finn Finnegan (Tanner Novlan) fell onto a trash bag after heroically stepping in front of his birth mother’s pointed gun that was aimed at Steffy. But B&B fans were not stunned when Sheila took a second shot, which hit Wood’s character.

The Bold And The Beautiful Spoilers – Dark Alley In Daytime

Steffy allowed Sheila to push her buttons. Finn’s wife aggressively went after his birth mother, which led to death and destruction.

However, Sheila is one-hundred percent responsible for the end of Finn’s life and for Steffy’s life being imperiled.

Kudos to the writing staff for teasing the alley terror before those fateful episodes when having Steffy trail her brother, Thomas Forrester (Matthew Atkinson), and Sheila to the back of Il Giordino. That established what was to come next.

Some buzz indicates Finn could be alive, with his mother, Li Finnegan (Naomi Matsuda) caring for him. It would be great if that were true. But viewers must deal with the story line as it is now, meaning that the main characters believe Finn is dead.

Steffy will recall the horror she witnessed and endured. Then, she will talk of a trip to the morgue. If she identifies her husband’s cold body, hopes for Finn’s secret survival will be dashed.

Sheila is grieving the loss of her son that she caused. Steffy and the others have no idea Sheila is the shooter. There will be a soapy riot when that fact is eventually revealed. But until then, Sheila remains a true threat.

It is good for Sheila that Steffy can not recall the details of her husband’s death. But Brown’s character must believe that she is on a time limit, with Steffy’s survival posing a direct threat to her freedom.

No rational member of a so-called justice system would have released Sheila from jail. Yet, she was freed, later killed her son, and shot her daughter-in-law.

Rehabilitation is a reasonable effort to make for selected individuals. But Sheila, never. And so this threat to humanity will take another shot at silencing Steffy, with a likely different weapon of choice selected.