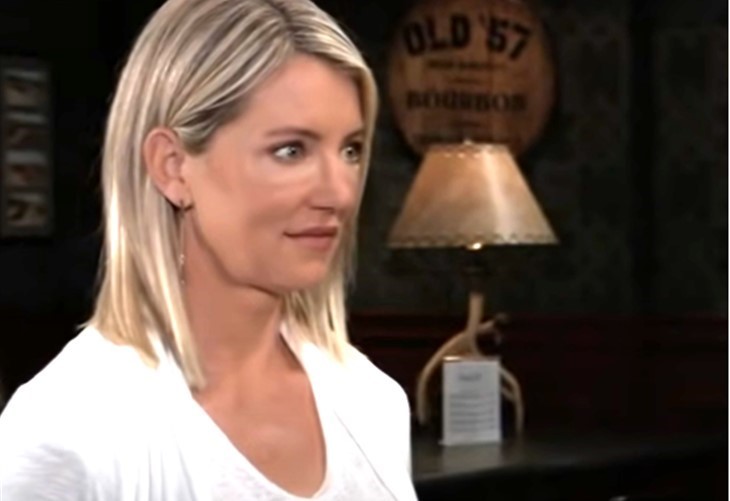 General Hospital (GH) spoilers and updates tease Nina Reeves (Cynthia Watros) has been dealing with issues close to her heart. Nina has been trying to get visitation rights to see her grandson Wiley Quartermaine-Corinthos (Viron Weaver). Nina has been having difficulty getting Wiley’s parents Michael Corinthos (Chad Duell) and Willow Tait (Katelyn MacMullen) to agree to let her be in Wiley’s life. Nina has wanted to help Sonny Corinthos (Maurice Benard) and Valentin Cassadine (James Patrick Stuart) to figure out what they need to do about the problems that they have been having.

Nina has formed a strong relationship with Sonny. Nina and Sonny got close while they were in Nixon Falls. Sonny has been having trouble with Michael because he has gotten close to Nina. Michael believes that Sonny has betrayed his family, especially his mother Carly Corinthos (Laura Wright) because of his relationship with Nina. Michael has been upset with Nina because she kept the truth about Sonny being alive from his family and friends.

Michael has told Sonny that he does not want to have anything to do with him. Sonny had hoped that Willow could help him to repair his relationship with Michael but Willow could not help Sonny to get Michael to give Sonny a chance. Nina cares about Sonny and will want to help him to get close to Michael again. Nina wants to be a part of Wiley’s life but may offer to stop the legal actions that she has taken against Michael and Willow. Sonny may tell Nina that she should not give up her case against Michael and Willow and to fight to be in Wiley’s life.

Nina had been married to Valentin in the past. Nina and Valentin have been able to stay friends. Nina will want to know what Valentin has been doing with his life. Valentin may tell Nina that he has been getting close to Anna Devane (Finola Hughes).

Valentin has been supporting Anna because she has been dealing with the fallout from dealing with her nephew Peter August (Wes Ramsey). Nina will be excited to find out that Valentin is in a relationship with Anna. Nina knows that Valentin has wanted to be a part of Anna’s life for a long time. Valentin has been trying to figure out what he wants to do about his father Victor Cassadine (Charles Shaughnessy). Nina will want to help Valentin to try to decide if he wants to let Victor be a part of his life.

General Hospital Nina wants to give Sonny and Valentin the help that they need to face the difficult challenges that they are dealing with. Nina wants Sonny to keep his relationship with Michael. Can Nina help Sonny to figure out a way to get Michael back in his life? Nina will want to help Valentin to decide the direction that he wants to take in his relationship with Victor. Will Nina help Valentin to make the right choice about Victor?