The Bold And The Beautiful Spoilers: Sheila Reveal Dooms Taylor? – Brooke Is Voice Of Reason 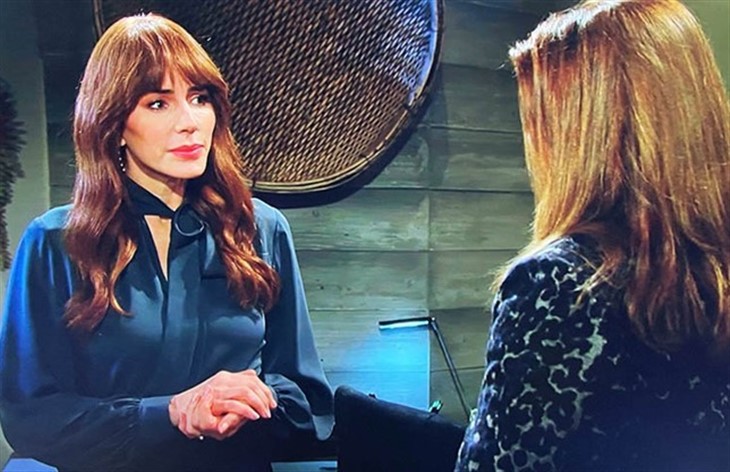 The Bold and the Beautiful spoilers document that Sheila Carter (Kimberlin Brown) will flirt with permanently silencing the only known living witness to her son’s murder. But Steffy Forrester Finnegan (Jacqueline MacInnes Wood) will avoid becoming Sheila’s next victim.

Teasers indicate that Sheila will not be able to go through with her impulse to do away with Steffy while she lays helplessly in her hospital bed. A heartfelt turnabout will surprise Sheila as Steffy wakes up and offers a touch of compassion for the woman who she thinks is grieving John Finn Finnegan’s (Tanner Novlan) death.

Sheila panicked when Deacon Sharpe (Sean Kanan) told her that Steffy survived the shooting. Brown’s character assumed that the second shot she fired caused her daughter-in-law to die in the alley behind Il Giordino.

So, Sheila thought that Steffy would wake up and immediately identify her as the shooter. Then, Steffy’s selective memory loss happened.

While it is not unfathomable for any trauma victim to repress the details of a horrific event, it is fortunate for B&B’s GOAT (greatest of all-time) villain. But how long will this portion of Steffy’s memory remain blocked?

Based on all that everyone except Sheila and eventually, Steffy, knows, there is no reason to believe that Brooke Logan Forrester (Katherine Kelly Lang) has a chance to revive her marriage. Finn’s grisly death means that Steffy’s parents are focused on her.

Taylor Hayes (Krista Allen) and Ridge Forrester (Thorsten Kaye) were already finding their way back to each other. While they did not officially reconcile, due to Ridge’s existing marriage to Brooke, there was plenty of forward momentum in play.

But the drama involving Steffy effectively pushes the pause button on Taylor and Ridge furthering their comeback.

Brooke had a lot to say to Taylor about going along with Steffy’s mind cloud. While Brooke’s words came across as harsh, she was right to discourage that falsehood from being enabled indefinitely.

Ridge has no idea that Sheila is the reason his wife drank on New Year’s Eve. Her coming reveal as Steffy’s shooter could happen in days, weeks, or months. Such is soap.

So, Brooke will unknowingly wait for that outcome. Fans of a Brooke-Ridge revival should hope it happens sooner rather than later to decrease the odds of Taylor and Ridge reconciling soon.