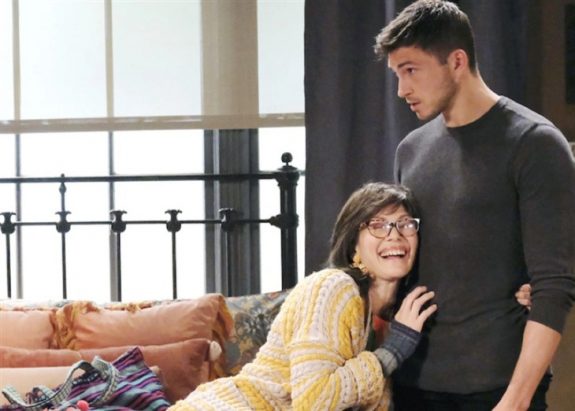 Days of Our Lives spoilers and updates tease that a desperate Ben Weston (Robert Scott Wilson) will ask for Susan Banks’ (Stacy Haiduk) help in an upcoming DOOL episode!

Unless this is one of Undead Andre DiMera’s (Thaao Penghlis) tricks, and Ben is only dreaming, it appears that Ben has escaped from the DiMera crypt! Ben and Jake DiMera (Brandon Barash) first seek Marlena Evans’ (Deidre Hall) help to find Ciara Weston (Victoria Konefal). When that apparently fails, Ben seeks out Susan Banks and asks her to get a psychic message to Ciara, remembering the psychic messages between them when she was missing.

Previous DOOL episodes revealed that Ben and Ciara communicated through dreams when she was missing and presumed dead for all those months. But Ben never gave up believing she was alive and kept searching, even when her own mother gave up!

Ben trusts in Susan’s psychic abilities, even if some of her premonitions are a little hard to understand. Usually they do come true and they are better understood once they’ve happened, such as when Susan saw fish and Ciara was kept in a glass room.

It could have been thought of as an aquarium of sorts, since Susan’s visions are subject to interpretation and the interpretation is often not clear! Ben knows that Susan can somehow contact Ciara for him and hopefully can find out her location as well! Susan will do her best to help – she knows that satan is after Baby Weston and that time is of the essence!

Previous DOOL episodes revealed that satan is already with Ciara in the person of Allie Horton (Lindsay Arnold), and Ben knows it. AllieDevil was the one who drugged Ben with a cup of tea and locked him in the DiMera crypt with Johnny DiMera (Carson Boatman) who explained everything! Johnny had told Ben about having not known anything from the time of Marlena’s exorcism until the devil jumped from him to Allie.

Jake knew that the devil was in Johnny too, having talked about it with Ben and then later with Gabi Hernandez (Camila Banus)! Jake had tried to explain to Gabi what had happened when their deal with Victor Kiriakis (John Aniston) fell through, but it didn’t do any good.

Susan tries to send a psychic message to Ciara from Ben and senses she and the baby are in trouble! AllieDevil had gotten Evan Frears (Brock Kelly) out of prison and they staged a scene for Ciara of a dead Ben! Susan tries to get it through the atmosphere that Ben is alive and he’s looking for Ciara, but she’s not sure if Ciara got the message or not! Susan will keep trying the universe for clues to see if she can find where AllieDevil has her so there is some clear direction for Ben! Susan doesn’t give up easily and neither does Ben; but can they find her in time?