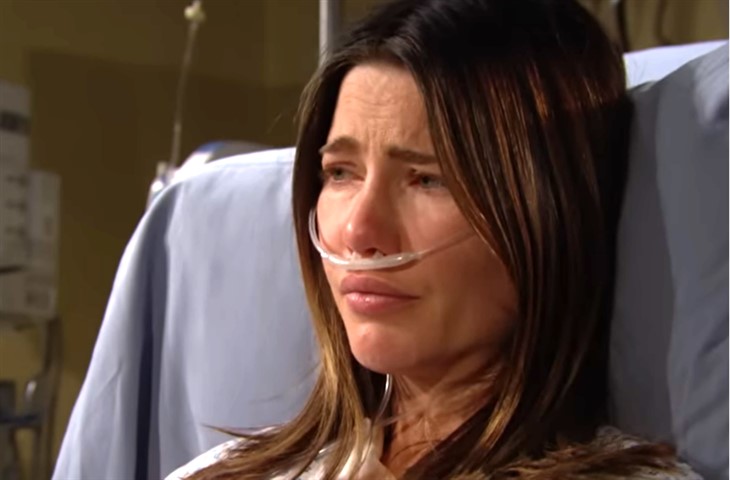 The Bold and the Beautiful spoilers document that Steffy Forrester Finnegan’s (Jacqueline MacInnes Wood) painkiller addiction is being highlighted while she is recovering from the gunshot wound. That makes sense, as Bridget Forrester (Ashley Jones) would naturally be aware of monitoring her painkiller meds.

The Bold And The Beautiful Spoilers: Sheila Reveal Dooms Taylor? – Brooke Is Voice Of Reason

The Bold And The Beautiful Spoilers – Taylor Hayes Opened Access

As devoted viewers recall, Steffy was firmly opposed to Sheila being allowed access to her husband or their son, Hayes Forrester Finnegan (Samantha Worden and Piper Harriet). But Taylor Hayes (Krista Allen) wanted to give Sheila a chance to prove herself.

Taylor’s reliance on a mix of compassion and psychological theory proved deadly for Finn and life-altering for Steffy and Hayes. But Allen’s character does not know that yet because Sheila has not been revealed as the perpetrator of those terrible crimes.

Remaining naive, Taylor now sees Sheila as a poor soul and continues to advocate for her inclusion in the Forrester family.

If Sheila can somehow engineer Steffy into becoming addicted again, then Wood’s character may need to spend an extended period in rehabilitation. That would dovetail with Wood’s anticipated maternity leave, as she previously announced the anticipated birth of her third child sometime this spring.

Wood has likely filmed and may still be filming advanced scenes. Naturally, she and TPTB are tight-lipped about the actor’s schedule, as its reveal would allow fans to approximate how that jibs with the flow of Steffy’s plight.

Having Steffy become hooked on painkillers or worse, have an overdose that leads to an extended recovery period, is a potential plot tool that could be employed to address Wood’s pending birth.

Sheila is sorry for killing Finn. But viewers see that she is rationalizing the perceived need to kill Steffy off.

Steffy’s mother-in-law believes that Steffy must be killed off because her memory is coming back. Bridget classified Steffy’s ability to recall what happened during the shooting as imminent, which provoked Sheila to attempt to adjust Steffy’s med drip while her family stood in the hospital hallway.

Soap fans suspend disbelief because Sheila slipped into Steffy’s room while various people were directly outside and because any increase in the fluid medication would certainly be soon noticed in the real world. But this is daytime, and the drama represents classically great soap.