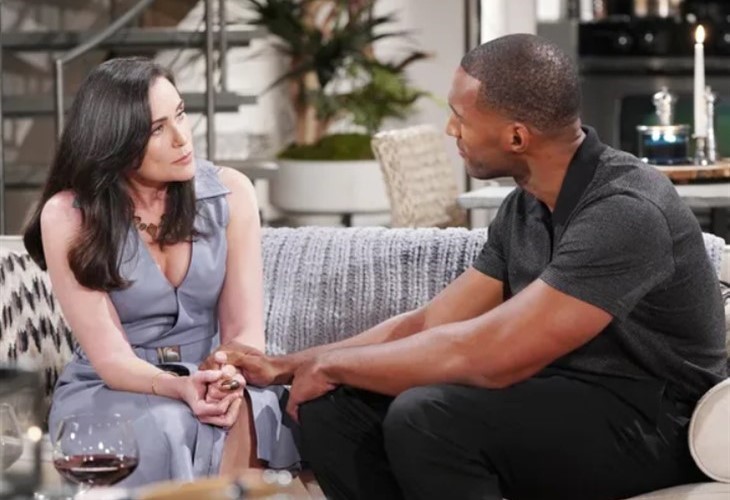 The Bold and The Beautiful (B&B) spoilers and updates tease that Quinn Forrester (Rena Sofer) will tell Carter Walton (Lawrence Saint-Victor) he can do better than Paris Buckingham (Diamond White) in an upcoming B & B episode!

The Bold And The Beautiful Spoilers – Carter Walton Was Blackmailed

Carter and Quinn have a heart to heart talk for the first time in several months after breaking off their own affair, and it’s obvious it hurt Carter to let go of Paris. But Grace Buckingham (Cassandra Creech) had blackmailed Carter into breaking things off with her; she didn’t trust him after what happened with her other daughter Zoe Buckingham (Kiara Barnes). Previous B & B episodes had revealed he started his affair with Quinn while engaged to Zoe and she found out and left the country!

Quinn, in the meantime has been trying to make a sexless marriage work with Eric Forrester (John McCook) and be satisfied with companionship only. Several months ago he realized his sexual dysfunction was only with Quinn, so it must be psychologically based!

Zende Dominguez (Delon de Metz) had Quinn custom make a beautiful and expensive engagement ring for Paris, and she knew something was wrong when she didn’t see it. Paris had found out that Zende was going to propose marriage to her but she was already falling for Carter, and told him they were getting too serious. So she avoided the proposal entirely by steering him away from popping the question to her that evening and so Zende never gave her the ring. Later, after Carter had broken things off with her because of her mother’s blackmail she came clean to Zende. She admitted she’d been seeing Carter and that was why she took so many steps back with him!

Carter tells Quinn he was blackmailed by Grace into breaking up with Paris, and Quinn really isn’t all that surprised. She tells Carter where both Zoe and Paris are concerned, the apples probably didn’t fall far from the tree. He also tells Quinn that Paris came after him, not the other way around and she notes it sounds like she’s looking for daddy in Carter.

Carter is some years older than both Zoe and Paris and their father Reese Buckingham (Wayne Brady) certainly wasn’t a prize! Carter is also fairly well to do as attorney for Forrester Creations, and Quinn wonders if Zoe and Paris were attracted to his money maybe even more than him!

B & B Spoilers – Quinn Forrester Tells Carter Walton He Can Do Better Than Paris Buckingham, But Does She Have Herself In Mind?

Quinn may be trying to comfort Carter as a friend, but viewers may wonder if she has herself in mind when she tells him he can do better than Paris! After all, there was something very deep happening emotionally between Carter and Quinn during their affair and both admitted there was much more to it than just sex! Quinn has to be tiring of so many months of trying to hang onto a relationship with Eric that for all intents and purposes has become platonic! She is still young, vital, beautiful, and has plenty of hormones to satisfy, and she may be getting to the point by now where she’s prepared to move on from Eric!