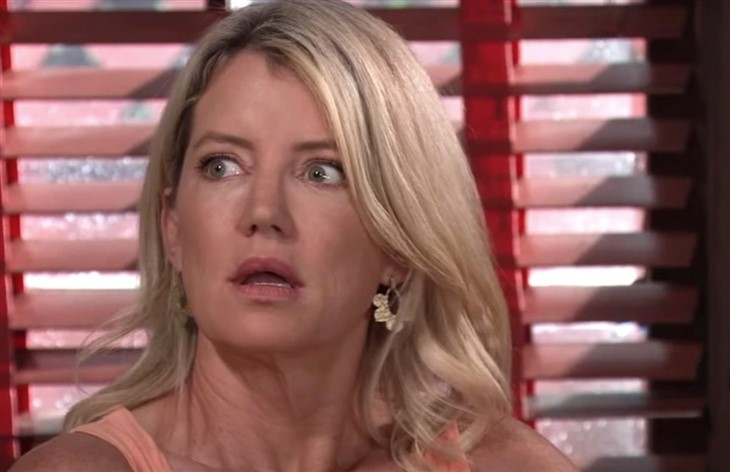 General Hospital (GH) spoilers and updates tease Nina Reeves (Cynthia Watros) has taken legal action to get what she wants. Nina has gotten Scott Baldwin (Kin Shriner) to file a lawsuit against Michael Corinthos (Chad Duell) and Willow Tait (Katelyn MacMullen). Nina wants to be able to get legal visitation rights to be in her grandson Wiley Quartermaine-Corinthos (Viron Weaver) life. Nina is worried about the outcome of the lawsuit. Nina has turned to her friend Ava Jerome-Cassadine (Maura West) to examine the potential ways the case could play out.

Ava has wanted Nina to be able to get to be in Wiley’s life. Ava knows that Nina has wanted to get to know Wiley because she did not get a chance to get to know Wiley’s mother Nelle Benson-Jerome (Chloe Lanier). Nina has wanted to find a way to get Michael and Willow to let her be a part of Wiley’s life but they have not wanted Nina around Wiley. Michael has not been able to forgive Nina for keeping the secret that his father Sonny Corinthos (Maurice Benard) was alive from his family.

Michael has been upset that Sonny got divorced from his mother Carly Corinthos (Laura Wright) and has been spending time with Nina. Ava knows that Nina wants to have a relationship with Sonny. Ava may point out to Nina that she may be able to win the lawsuit and get to have both Wiley and Sonny in her life. Ava may tell Nina that it will be hard to make this possibility work because Sonny and Michael are at odds with each other.

Ava may tell Nina that she needs to prepare to lose both Wiley and Sonny. Ava knows that Sonny is loyal to Michael and may need to stand by him. Nina has not wanted to put Sonny in a bad position with Michael. Nina knows that Sonny may not have a choice but to turn his back on her to support Michael. Nina has been made aware that Michael has gotten a reporter Grant Smoltz (David Lautman) to try to find out information about her past to use against her.

Nina knows that she has had a troubled past and could cause her lose her chance to have Wiley in her life. Ava may believe that Nina needs to make sure that she has looked at her past to make sure that it cannot be used against her. Ava does not want Nina to lose both Wiley and Sonny. Ava may tell Nina that she may find that she gets to have Sonny or Wiley but not both of them.

General Hospital Nina and Ava do not know about a secret that Harmony Miller (Inga Cadranel) is keeping. Harmony has kept the secret she is not Willow’s biological mother. Harmony knows that Nina is really Willow’s biological mother. Nina and Willow have not had a close relationship in the past but Willow has been open to Nina being in Wiley’s life. Will Nina and Willow find out that they are mother and daughter?

Nina could find that the situation could change if she and Willow find out the truth. Will Nina be able to get to have Willow and Wiley in her life? Nina and Sonny could find that they could get Michael to be more willing to accept Nina having a relationship with Sonny and Wiley when he finds out the truth. Will Nina get Michael to approve of her being in the lives of the ones he loves?