The Bold And The Beautiful Spoilers: Quinn Can Not Let Carter Go – Paris Overcomes Challenge? 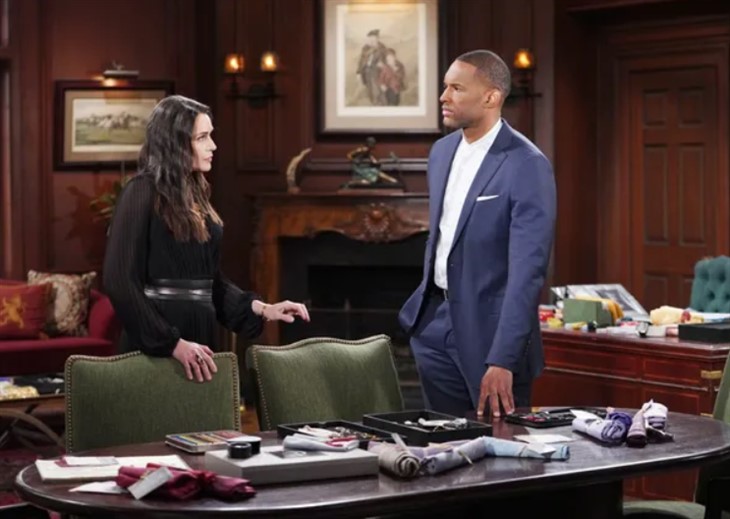 The Bold and the Beautiful spoilers document that Quinn Fuller (Rena Sofer) recently began talking with Carter Walton (Lawrence Saint-Victor) again. That begs the question whether this one-time coupling is becoming that again?

Quinn might feel protective of Carter based on the closeness they shared in the recent past. Carter continues to project a lonely guy, which stretches the suspension of disbelief scenario. So, Quinn may be his main go-to relationship advice option.

Quinn told Carter something unexpected. Eric Forrester (John McCook) sleeps in the guest house on various occasions. Why would that be if this pairing was fully reconciled?

He may be experiencing sporadic ED issues, which was why he distanced himself from Quinn in the recent past. However, it would seem somewhat boring to revisit the same topic so soon after that story line appeared resolved.

However, maybe appeared is the word to focus on. Possibly, TPTB did not resolve the conflict between Eric and Quinn and is still in the process of splitting them?

Carter displays great vulnerability when speaking with Quinn. The reveal, that he misses her, evoked the same response from Sofer’s character.

There was no doubt that each person felt strongly for the other during their brief romantic period. Quinn’s decision to end things did not result from the dissipation of desire for Carter. Instead, she felt a greater sense of loyalty to Eric.

Carter knows that his career hinges on being loyal to Eric and Forrester Creations. So, he can not revisit a personal connection with Quinn without almost certainly triggering the end of his run at FC.

The Bold And The Beautiful Spoilers – Paris Buckingham Has Time?

All decisions are not open to everyone indefinitely. So, Zende Forrester Dominguez’ (Delon de Metz) statement about waiting many years for Paris Buckingham (Diamond White) to marry him if he has to could purely represent words.

Sure, Zende could choose to remain indefinitely single. But this is daytime where decisions need to be made about various story line directions.

So, Paris will need to decide if she cares for Zende enough to accept his engagement offer, with a marriage date to be set. That choice would leave some leeway before a final commitment. If she does not, Paris could lose this opportunity and potentially, a chance to be with Carter as well because of Quinn’s influence or eventual pairing with him herself.

At the same time, Paris might decide that her feelings for Carter will override her mother’s advice. Grace Buckingham (Cassandra Creech) has and will likely remain involved in her daughter’s thought process.