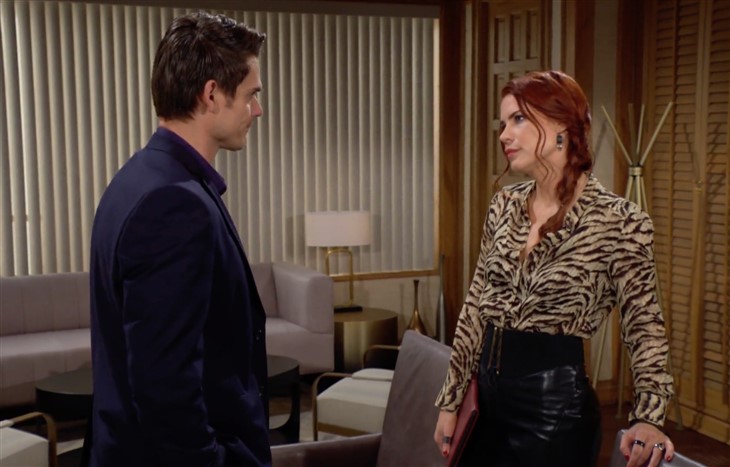 The Young and the Restless spoilers document that Adam Newman (Mark Grossman) sees a soul mate in Sally Spectra (Courtney Hope). She shares elements with his other loves but is also an original.

Adam and Sally are smart and gutsy. They have lived as outcasts due to their outlandish behavior. Today, they are striving for various forms of redemption.

This coupling is made for daytime because Adam and Sally are dynamic, opinionated, and are not afraid to take risks. Chelsea Lawson (Melissa Claire Egan) has taken notice.

Y&R: What Happens To Sharon After Rey’s Tragic Death? Sharon Case Weighs In

Adam hurt Chelsea on various occasions. However, she struck back with a vengeance last year.

Enraged by what she perceived as an affair, Chelsea left the penthouse while presumed to be fully paralyzed and poisoned Rey Rosales (Jordi Vilasuso). She was trying to set Adam up for the crime as a revenge play against him and Sharon.

Of course, Adam was out of his mind in the months before Chelsea’s payback, intending to level Newman Towers while his family members were inside. Chelsea discovered Adam’s plan, he had her kidnapped, and her stroke followed.

The modern edition of this many-times couple was dysfunctional. Adam was right to reject Chelsea’s request that they try to reconcile.

Loyal soap fans can see the great potential for eventual combustion. Adam and Sally are lovey-dovey right now. But someday, they will turn on each other after one gets mad about something.

Adam is sincere in his feelings for Sally, and her goo goo eyes for him are real. But for now, they are Y&R’s newest couple.

The Young and the Restless Spoilers – Chelsea Lawson Was Distracted

Chelsea allowed herself to fall in like with Rey. She had a very direct conversation with his wife just before his death. The ladies cleared the air, with Chelsea appearing to be open.

Sharon Rosales (Sharon Case) wondered if Chelsea was after Rey. Egan’s character assured Sharon that she was not, but Chelsea’s pasted smile masked her true feelings.

Chelsea did not tell Sharon what the viewers know. The dream Chelsea had about Rey, where he said she was the most fascinating woman he ever knew, and then they kissed, was not shared with Sharon. In retrospect, that sequence reflected Chelsea’s loneliness.

Adam is not interested, and Rey is gone forever. So, Chelsea appears to be on her own for the foreseeable future unless an old flame, like Nick Newman (Joshua Morrow), or a new love interest appears in Genoa City, Wisconsin.