The Bold And The Beautiful Spoilers: Eric Shocks With Donna – Fans Misdirected Toward Quinn And Carter 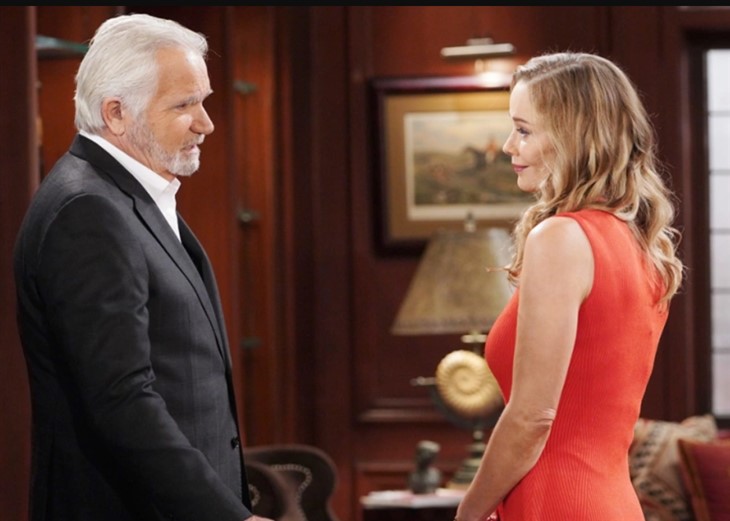 The Bold and the Beautiful Spoilers: Eric Shocks With Donna – Fans Misdirected Toward Quinn and Carter

The Bold and the Beautiful spoilers document that Eric Forrester (John McCook) shocked the audience. Just as fans were convinced recent gooey conversations between Quinn Fuller (Rena Sofer) and Carter Walton (Lawrence Saint-Victor) meant that the former couple was positioned to reunite, Donna Logan (Jennifer Gareis) appeared aside of Eric during an afternoon of delight.

The Bold And The Beautiful Spoilers – So, Eric Forrester And Donna Logan. How About That Unexpected Scene On B&B?

It appears Eric’s recent problems are not an issue, as Donna can attest. Yes, honey bear had a serious conversation with Quinn about Steffy Forrester Finnegan’s (Jacqueline MacInnes Wood) trauma, and Carter walked into the Forrester Creations executive office. Then, in a subsequent scene, Gareis’ character made a reappearance after not being seen in months.

The Bold And The Beautiful Spoilers: Can Steffy Prove Sheila Is Guilty? – Recall Is Not Enough

B&B Spoilers – Quinn Fuller Does Not Call The Shots

Eric allowed himself to be taken advantage of during the story line where his ED problem resulted in him incredibly approving of Quinn and Carter being together. That plot development stretched viewers’ minds to the extreme.

It was fair to argue that Eric’s choice was not believable, and his decision to stay with Quinn after she ended matters with Carter also was unfathomable. Relying on Eric’s legendary forgiveness gene to explain his excusing Quinn’s repeated betrayals made him look like a doormat.

Viewers are now learning that he harbored resentment toward Quinn and has reconnected with Donna.

Donna is devoted to Eric, who she considers as her true love. Is he that for Quinn or simply someone who makes her happy, meaning it is far more about her than him?

Gareis’ character is ever-appealing and a better personality match for Eric. At this later stage of his life, Eric needs and deserves someone he can trust.

Donna is super sweet. There is no doubt that her love for Eric is complete. But will he make a clean break from Quinn?

What benefit is it to Eric to stay married to Quinn? Fans have seen that she appears to have fallen in love with Carter or has some form of split feelings for him and Eric.

Eric can do what looks right for himself and allow Quinn to pursue a man she appears to believe is a better match at this point in her life. So, lingering feelings in Los Angeles, California, were not just in Quinn’s heart and mind. Eric remained conflicted as well and appears to have retained his pride.