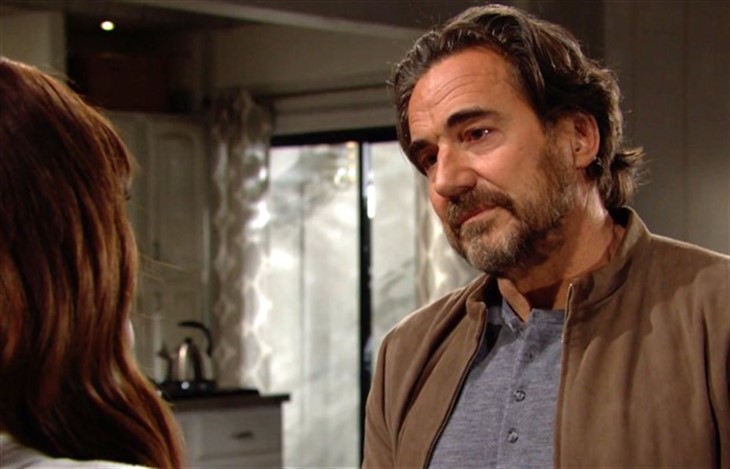 The Bold and the Beautiful spoilers document that Ridge Forrester (Thorsten Kaye) and Taylor Hayes’ (Krista Allen) support for their daughter during her time of tragedy is meaningful. So is the deepening bond between this one-time married couple.

Ridge has not ended his marriage to Brooke Logan Forrester (Katherine Kelly Lang), which winks at a potential reunion. However, fans must wonder if he and Brooke will reunite even if all Sheila Carter’s (Kimberlin Brown) horrid secrets are revealed?

However, a cataclysmic shift in all impacted characters’ lives will happen if Sheila’s actions in the alley are exposed or divulged. The Forrester, Finnegan, and Spencer families will gain the painful missing pieces that they need. That will resolve the strange happenstance surrounding John Finn Finnegan’s (Tanner Novlan) seemingly senseless death.

The Bold And The Beautiful Spoilers: Eric Shocks With Donna – Fans Misdirected Toward Quinn And Carter

Whether Sheila is arrested, escapes Los Angeles, California, or is perceived to perish in some soapy dramatics may soon be seen. There is buzz that indicates May Sweeps month will tell the tale.

But Finn’s death and Steffy Forrester Finnegan’s (Jacqueline MacInnes Wood) shooting are not connected to what Sheila did on New Year’s Eve to Brooke. So, maybe that reveal is withheld or never told?

It would be easy for TPTB to keep Sheila’s champagne bottle switch secret. Thomas Forrester (Matthew Atkinson) has been holding that reveal.

Atkinson’s character has mixed feelings, although they are not that conflicted because he has willfully kept Sheila’s tell to him from his dad. Ridge deserves to know this information because Brooke’s use of alcohol was directly tied to what she and Deacon Sharpe (Sean Kanan) did on that fateful holiday night.

But the writing staff could have Thomas choose to keep what he knows to himself. He never told anyone that Quinn Fuller (Rena Sofer) put alcohol in Brooke’s juice bottle in the recent past.

Thomas does not want Ridge to remain married to Brooke. So, Thomas’ conscience could be the decisive factor in whether Ridge and Brooke learn the truth.

Brooke has no idea why she felt compelled to drink on New Year’s Eve. She does know that doing so allowed her inhibitions to drop. That led to her unwanted romantic flirtation with Deacon that led nowhere substantial yet pushed Ridge’s buttons as Sheila hoped.

Brooke will likely be able to do no better than live in Limbo until Sheila’s role in New Year’s Eve is known. Meanwhile, Taylor grows closer to Ridge by the day, which implies an eventual reconciliation.