The Young And The Restless Spoilers: Kyle Opens The Door To Diane – Ashland Walks In 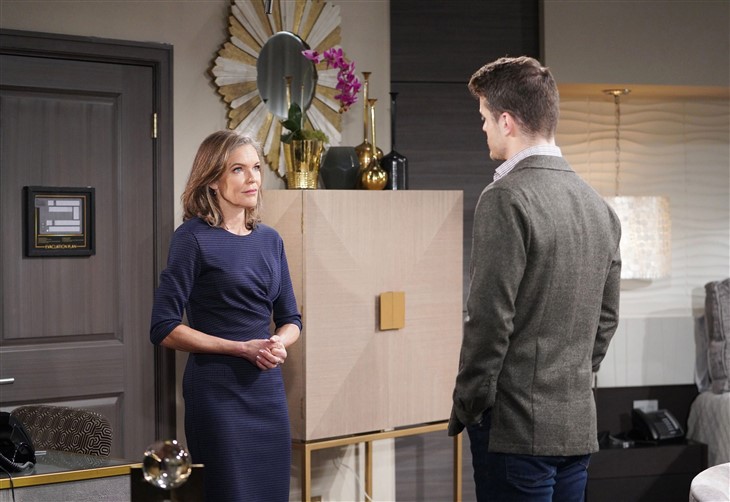 The Young and the Restless spoilers document that Kyle Abbott (Michael Mealor) did not accept or dismiss what his mother told him in her suite at the Grand Phoenix Hotel. Rather than cut her off or forgive his mom without conditions, he created a compromise.

Kyle asked his mother not to return to Los Angeles, California. Diane Jenkins (Susan Walters) was thrilled to learn what he son said.

She will stay in Genoa City, Wisconsin, because Kyle said he is leaving the door open to see if she can prove herself. While Diane’s words seemed honest, Kyle wants to determine if her actions support the stated intentions.

Jack Abbott (Peter Bergman) was surprised by Kyle’s decision. However, Jack recently told Phyllis Summers (Michelle Stafford) that he needs to consider whether Diane has truly changed. So, father and son are thinking alike.

Jack and Kyle are leaving the daytime door open. Longtime viewers know that Kyle loved his mother completely when he was a child but that Jack had a tormented connection with Diane.

Phyllis was stunned by Jack giving Diane even a sliver of the benefit of the doubt. But his thoughts are linked to witnessing Diane’s love for Kyle and those positive moments that Jack shared with her himself.

The writing staff is clearly pushing the plot, as what Diane wanted could have taken months or years to achieve if the GC residents in question ever accepted her pitch.

Walters’ character does seem to want to reconnect with Kyle. If what she is saying is true, she reached realizations and made an eventual breakthrough with her therapist in Los Angeles, California.

Ashland Locke (Robert Newman) left Victoria Newman’s (Amelia Heinle) home after he agreed to annul their marriage. He moved into the Grand Phoenix Hotel after refusing to leave town.

Just as Diane appears to have no open roads back to past significant others, Ashland appears stymied where Victoria is concerned. But he and Diane are sure to meet at The GP.

Both characters have a lot in common. They are outcasts, well-heeled, supposedly reforming connivers, and share various common enemies. Yes, devoted soap fans see this projected match on Y&R, and the drama that such a pairing would provoke.