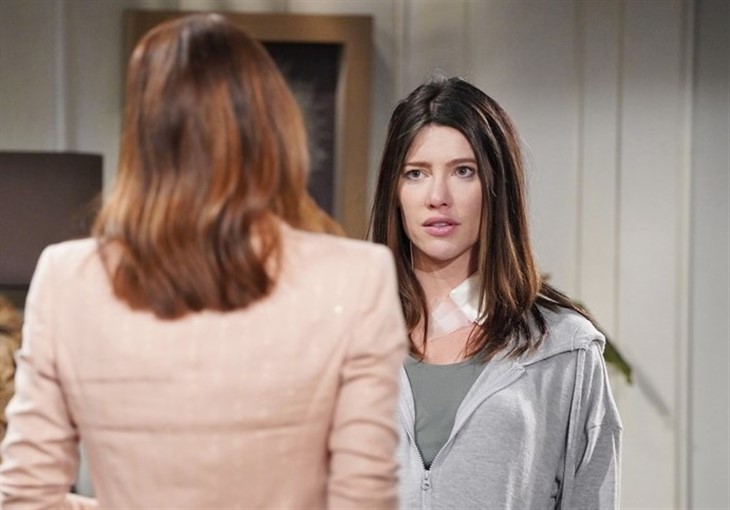 Now that Steffy’s home from the hospital and reunited with her children, she drives herself to remember what happened the night of the shooting. She is still mentally and physically exhausted, and devastated with grief after losing her husband, but that seems to be what’s driving her – who killed him? She gets some vague flashes in her mind of a figure with a gun, but her mind still represses the full memory of Dr. John “Finn” Finnegan’s (Tanner Novlan) death.

However, she begins getting emotions – emotions connected to the traumatic memories lodged in her subconscious, which is a normal process. When one has repressed memories due to a traumatic incident that has been experienced, the emotions come up first, sometimes associated with nightmares or triggers.

Steffy is definitely triggered by sightings of Sheila Carter (Kimberlin Brown) and even more so when she comes to visit her at the cliff house. Steffy’s mother Taylor Hayes (Krista Allen) is with her on the first visit, when Sheila shows up unannounced for a visit with her grandson. Steffy will not allow Sheila to see baby Hayes Forrester Finnegan (Piper Harriott) on the first visit – Steffy’s response is extremely antagonistic towards Sheila.

She demands Sheila leaves, but after she does, Steffy’s memories start to surface when she is with Taylor and her father, Ridge Forrester (Thorsten Kaye). Both parents are with her when her traumatic memories surface, she clearly recalls arguing with Sheila in the alley behind Il Giardino, and sees her pull the gun and Finn shot!

The Bold And The Beautiful Spoilers – The Forrester-Finnegan Family Are Shocked!

Needless to say, Steffy, Ridge and Taylor are all shocked when they realize Sheila not only shot Steffy but killed her own son! Steffy is devastated and angry, and so are her parents – even Taylor, who can’t believe Sheila fooled her! They want to call Deputy Chief Bradley Baker (Dan Martin) right away and have Sheila arrested, but Steffy has a better plan.

Steffy wants to be there up close and personal when Sheila goes down, and she doesn’t want Sheila to see it coming! She also wants Baker there nearby so he can witness the confrontation that Sheila’s in for, and it will be a double devil doozy!

After making arrangements with Deputy Chief Baker to come over and lurk, Steffy makes a call to Sheila feigning regret she didn’t let her see Hayes. Sheila, of course, takes the bait and tells Steffy she will be right over, not anticipating that she’s walking right into a trap!

Taylor and Ridge are in on the plan as well and when Sheila arrives, Steffy lays into her with all the fury she can muster! Baker is nearby observing and recording when Steffy accuses her of coldblooded murder of her own son and gives details of what she observed before Sheila turned the gun on her!