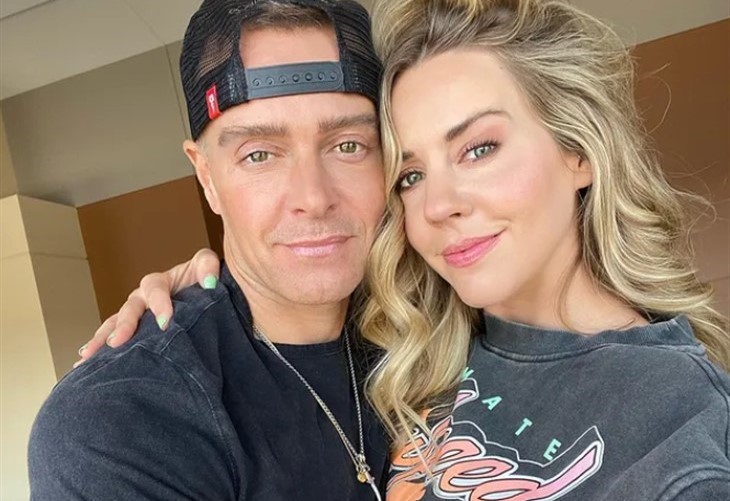 Joey Lawrence, known for Dancing With The Stars, just celebrated a different reason to dance! Overflowing with gratitude, Joey shared his joy in tying the knot with actress Samantha Cope. And as the new bride revealed, she feels exactly the same way.

Learn all about Joey’s and Samantha’s romantic wedding. And see what they both shared about their wedding day. Get the latest Dancing With The Stars wedding news below.

Dancing With The Stars – Alum Gets Married!

Joey Lawrence used one word to share his feelings about getting married to Samantha Cope. “Thankful!” declared the Dancing With The Stars alum, reported People. And Joey’s gratitude overflowed as the 46-year-old tied the knot with his 34-year-old then-fiancée on a beautiful California day outside the Temecula Creek Inn in Temecula.

“It just feels so right,” gushed Lawrence. “Life can be challenging at times,” he admitted. “But when God gives you the right person, it’s worth it.”

Joey Lawrence Is Married to Samantha Cope: 'I Am So Thankful!' https://t.co/9IbTJC6zSJ

Joey and Samantha limited their wedding ceremony to family and friends. For instance, Lawrence’s brothers Matthew Lawrence and Andrew Lawrence and two daughters, Charleston and Liberty, participated in the event. But the outdoors wedding didn’t prevent the bride from going all out in a romantic wedding dress! Cope glowed in a tulle gown, matching Lawrence’s cream suit.

Samantha first met Joey in 2020 when the two co-starred in a movie for Lifetime, “My Husband’s Secret Brother.” And Cope believes that the chemistry began instantly. “From day one, it was such a safe place to be myself,” explained Samantha.

And the actress feels that her new husband “loves everything about me and celebrates all those weird quirks about me. I was so blessed to be in a position to receive that,” added Cope. It took only two weeks for the actress to vow, “I will be with you forever.”

And Lawrence also believes the chemistry became apparently immediately. “When you meet the right person, if you’re lucky enough, it cuts to the chase so quick,” explained Joey. “I have somebody who is like-minded and has the same love language and we communicate the same way. That’s super important. And I am so thankful.”

But although Samantha and Joey met on that movie set, they took a year before getting engaged in 2021, reported Heavy. And in part, that delay results from Joey needing to finalize his divorce. “When you least expect it, obviously, is like when it usually works right in between all the plans we make,” admitted Lawrence.

However, the Dancing With The Stars alum finally finalized his divorce from first wife Chandie Yawn-Nelson in February 2022. Joey and Chandie had stayed together for 15 years before filing for divorce in 2020. They co-parent daughters Liberty, 11, and Charleston, 15.

As for Lawrence’s dreams for his future with Cope? Joey called Samantha “the most amazing person ever. Like your best friend and that person you really do share pretty much everything in common with.” And he added his vision of growing “old with [my] best pal.”

And given that Lawrence earned third place on Dancing With The Stars during the season three finale, that vision probably includes dancing on all his wedding anniversaries with Cope! The two can also enjoy watching his former show together when it returns in autumn 2022. However, when Dancing With The Stars does return, Disney+ rather than ABC will broadcast the famous show.

Tell us what you think. Do you admire Joey Lawrence’s hopes that his second marriage will last? And after you share your views, check back on our site for more Dancing With The Stars and celebrity news.