The Bold And the Beautiful Spoilers: Quinn As Forgiving As Husband After Eric’s Reveal? 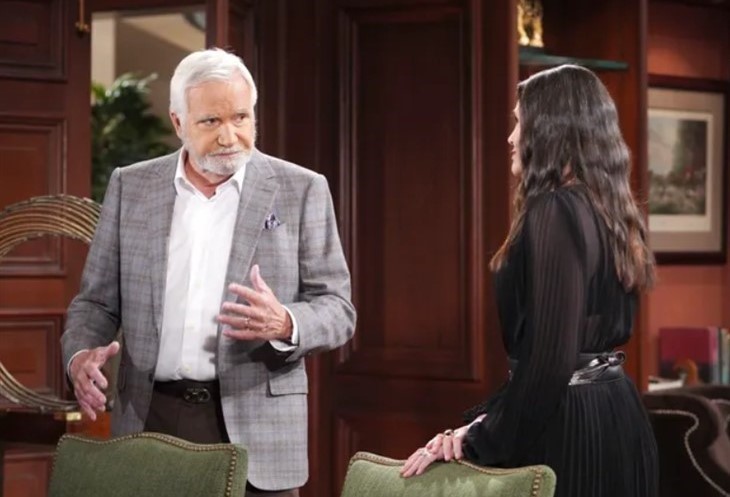 The Bold and the Beautiful spoilers document that Quinn Fuller (Rena Sofer) does not know what her husband is doing, but Donna Logan (Jennifer Gareis) and the fans do. Eric Forrester (John McCook) was obviously unable to let go of the hurt and betrayal Quinn created due to her connection with Carter Walton (Lawrence Saint-Victor).

The reveal of Eric and his one-time wife, Donna, was surprising. A contingent of fans likely cheered because they still want Quinn out of Eric’s life. However, there may be a segment of viewers that think Quinn is right for McCook’s character. The search for that group will begin.

The Bold And The Beautiful Spoilers – Eric Forrester’s Decision Revisited

Was Eric so forgiving of Quinn because he was harboring thoughts of leaving her back then? It is fair to ask that question now that time passed and he is cavorting with Donna.

Eric’s tell to Gareis’ charismatic character was direct. He said that being with her makes him happy. That means that Donna makes Eric happier than Quinn and could also mean that Sofer’s character represents dread.

Devoted viewers know that Eric was fully committed to Quinn many years ago. He defended Quinn to his family and endured resistance when marrying her and choosing to keep their union going through to today.

Carter earned a reputation through the years. He spoke softly and held the respect of the Forrester family. Well, that has changed.

The personal life of Saint-Victor’s character was greatly expanded in the last year-plus. His entanglement with Zoe Buckingham (Kiara Barnes) resulted in more heartache than joy.

Carter’s more recent link to Zoe’s sister, Paris Buckingham (Diamond White), appeared to have great potential. But he admitted to Quinn that his feelings do not match Paris’, which reopens the door to Sofer’s character.

The Bold And The Beautiful Spoilers – Quinn Fuller’s Powers Tested

Life has taught Quinn to look out for herself. However, she does love her son, Wyatt Spencer (Darin Brooks), and treats Flo Logan (Katrina Bowden) well.

B&B fans know that Wyatt and Flo have rarely been seen in recent months, as this half-hour steamer can only focus on select characters during the two or three ongoing storylines. So, Quinn’s reconciliation with Eric in the recent past appeared to end that part of the show.

Actually, that story was not over. Instead, TPTB hit the pause button with the Eric-Donna reveal providing a shocking and, depending upon one’s take, welcomed development.

Quinn should soon know that Eric is not devoted to her. That will test her power of forgiveness, with Carter standing by as her rebound or next husband.