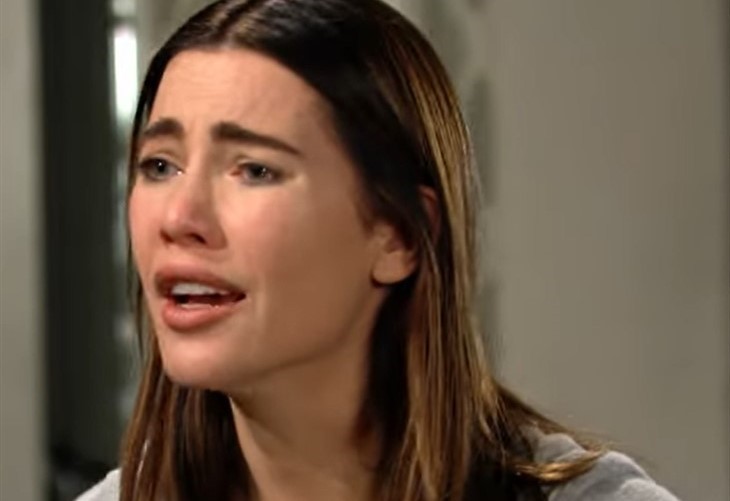 The Bold and the Beautiful spoilers document that the trap Steffy Forrester Finnegan (Jacqueline MacInnes Wood) sets for Sheila Carter (Kimberlin Brown) at the cliff house is teased to confirm who fired two shots in the alley behind Il Giordino. That is the more weighty part of the reveal.

Of lesser significance is what Sheila is also goaded into admitting. Additional teasers indicate that another tidbit will be unlocked in Steffy’s memory. Her recall of the reason for the meeting at Il Giordino will stun.

Viewers have seen countless replays of Brooke’s New Year’s Eve debacle with Deacon Sharpe (Sean Kanan). Despite the repetitive nature of those scenes, which were intended to reinforce the importance of Brooke Logan Forrester’s (Katherine Kelly Lang) missteps and fill the gaps between the winter and this spring.

The Bold And The Beautiful Spoilers: Who Is Paris Left With? – Zende Out And Carter Wants Quinn

However, so much happened since Sheila switched the champagne labels, which is why Brooke drank alcohol when December kissed January, and she did the same with Deacon. Most importantly, John Finn Finnegan (Tanner Novlan) was shot dead by Sheila, and then Steffy was shot as well.

Steffy’s memories of that horrible night were not vivid. She has been having trouble recalling why she was at the restaurant. Steffy also did not know why she and Finn found themselves in a dark alley.

Steffy’s dramatic memory recovery was sparked by Sheila’s voluntary trip to the cliff house. The actions of Brown’s character represented a combination of a wild, reckless persona but may have also projected a guilty, grieving mother’s desire to be caught and punished.

Trapping this villainous snake in Los Angeles, California, may not prove easy. Sheila is B&B’s all-time leading villain. She has often proven to be a master escape artist as well.

Brooke still can not explain why she felt compelled to drink, which led to her indefensible actions with Deacon. While Ridge reinforced his love for Brooke and is concerned about her continued sobriety, he decided Brooke’s drama was too much.

Taylor Hayes (Krista Allen) is part of the action as Ridge and Steffy witness Sheila react to the shooting information and why Wood’s character confronted her on that fateful evening. The stunning details Ridge hears will force him to reconsider his stance on Brooke.

Ridge loves Brooke, but he has been emotionally drifting back to Taylor since leaving the Logan mansion. Fans will see if Sheila’s secondary reveal results in Ridge recommitting to Brooke or staying with Taylor.