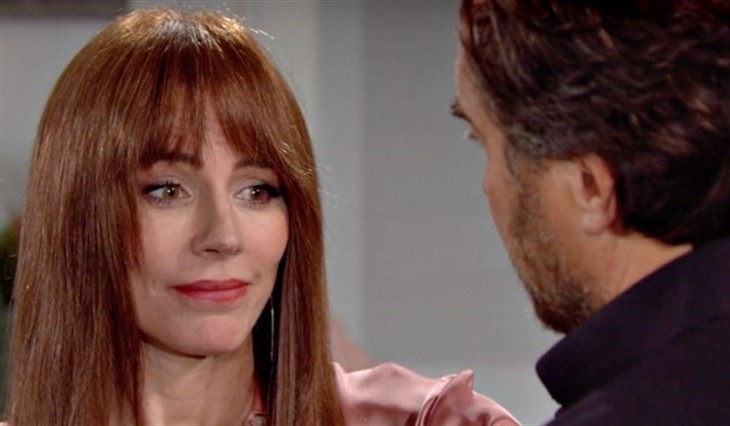 The Bold and the Beautiful spoilers document that Taylor Hayes’ (Krista Allen) return to Los Angeles, California started slow but has shifted into high gear. She is helping her daughter deal with the tragic loss of her husband and is trying to help Steffy Forrester Finnegan (Jacqueline MacInnes Wood) recover needed memories.

While the above is playing out. Taylor appears to be improving her odds of reconciling with her true love. Her goal of remarrying Ridge Forrester (Thorsten Kaye) appears within reach but is it?

Steffy’s recovered memories are teased to reveal that Sheila Carter (Kimberlin Brown), who Taylor is supporting, shot and killed John Finn Finnegan (Tanner Novlan). But Steffy will also recall that her mother-in-law was responsible for Ridge’s current wife drinking alcohol.

Brooke Logan Forrester (Katherine Kelly Lang) has been beside herself since the winter. As devoted viewers recall, she hosted what should have been a pleasant New Year’s Eve party with her family.

Deacon Sharpe (Sean Kanan) is part of Brooke’s family, regardless of what Ridge thinks. So, his inclusion on that night should not have created major drama.

Fans know that a weather event prevented Ridge from being able to jet back to Los Angeles, California. They also recall that Deacon forgot his smartphone in Brooke’s living room, and they drank together. That came after Brooke was downing a champagne bottle filled with alcohol as supplied by Sheila.

Taylor’s return to LA did not cause Ridge to leave Brooke. Instead Brooke’s actions forced Ridge to make a choice.

He decided Logan was in his heart. But Ridge’s mind was frazzled by her repeated incidents of drama.

Ridge has been open about his love for Brooke, even with Taylor. So, it is not hard to believe that Kaye’s character will return to Brooke after Steffy baits Sheila into admitting that she switched champagne labels.

Taylor was the one who championed some place for Sheila in Finn’s life. She believed that Brown’s character longed for a connection with Hayes Forrester Finnegan (Samantha Worden and Piper Harriet).

Taylor argued that Sheila could be managed because everyone would be watching her. Taylor’s psychiatric training made her the ideal person to determine if Sheila’s redemption efforts were sincere.

Steffy will realize that Taylor allowed the level of access that Sheila achieved. Whether Wood’s character applies blame to Taylor will be seen but is an option.

Sheila emotionally manipulated Taylor. If that did not happen, would Steffy’s life be different today?