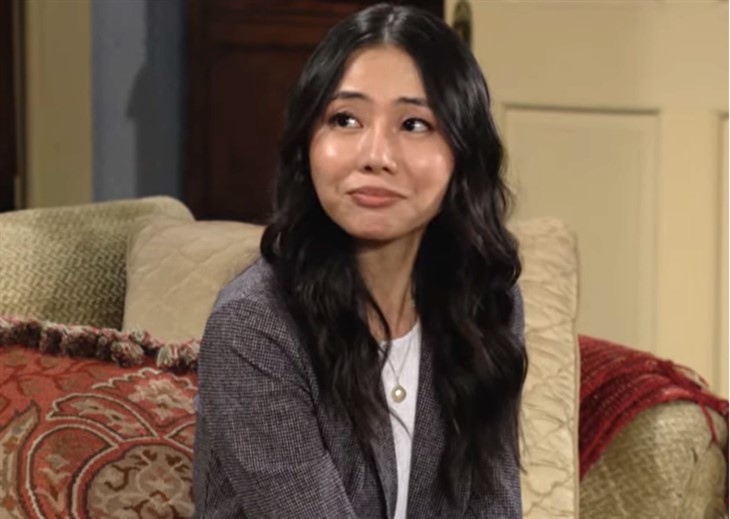 The Young and the Restless spoilers document that Allie Nguyen (Kelsey Wang) is exactly what the daytime doctor ordered. Jack Abbott (Peter Bergman) needed something magic to happen in his life to counter the return of Diane Jenkins (Susan Walters).

However, Diane is the only reason Jack knows Allie exists and what her genetic tie is to him. That soapy reality appears to be in Jack’s mind as he maintains a neutral stance with Kyle Abbott (Michael Mealor) about his notorious and now undead mother.

Newer viewers did not witness the wonderful love story that took place more than a quarter-century ago on Y&R. Jack reconnected with a woman, Luan Volien (Elizabeth Sung), that he met while serving in Vietnam in the 1970’s.

The Young And The Restless Spoilers: Billy Incapable Of Stopping – Victoria Pushes Forward

Luan’s and Jack rediscovered each other in Genoa City, Wisconsin, due to the suspension of disbelief technique. Fans accepted the unlikely nature of that meeting happening, but embraced the story line because of its warmth.

Luan revealed that she had a son through Jack but gave up for adoption. Keemo Volien (Philip Moon) was eventually located in Vietnam, and came to GC with Luan’s daughter from another man, Mai Volien (Marianne Rees).

Just as it was hard to believe that Luan would own an operate a restaurant that was one of Christine Williams’ (Lauralee Bell) go-to lunch spots, so too is it far-fetched that Diane would have successfully faked her own murder and become a Realtor in Los Angeles, California.

Then, Diane happened to learn that a deceased property owner, Keemo, who changed his complete name to match Luan’s father, had a next of kin, Allie. Of course, Allie is Keemo’s daughter, who Jack and Y&R fans never knew existed because Bergman’s character was estranged from his oldest son and kept that information to himself due to embarrassment.

But soap fans do not care about the convoluted nature of any tale as long as it creates intriguing possibilities for the characters they care about, new ones who enter the frame, or former nemeses who help stir the pot.

Jack has a solid bond with his younger son he had to raise on his own after Diane felt compelled to check out of GC. Jack is also likely in the process of romantically reconnecting with Phyllis Summers (Michelle Stafford).

Adding Allie enhances Jack’s life in ways that he never anticipated. And maybe, just maybe, Diane will not make herself a thorn in Jack’s side this time around.

Kyle and the fans do not expect Diane to have transformed into a saint. No, it is the Abbott family’s stable footing and ability to protect itself that creates the potential for Diane not to be as menacing as she was in the past. Though this projection is clearly an optimists take.