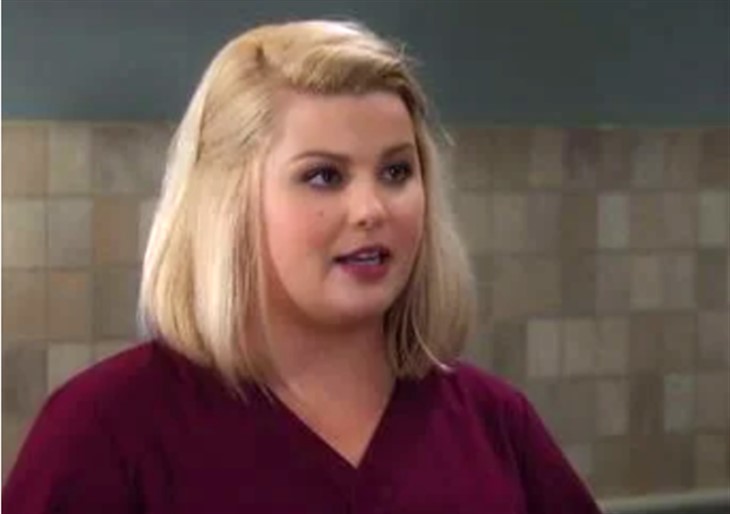 General Hospital spoilers tease that there have been increasing tensions between Dr. Terry Randolph (Cassandra James) and Amy Driscoll (Risa Dorken). Amy has been a nurse at General Hospital for many years now, and she was there when Brad Cooper (Perry Shen) was employed there. Amy knows firsthand all of the awful things that Brad did. So, when Amy discovered that Terry had not only agreed to interview Brad but was also considering hiring him, Amy wasn’t shy about her disapproval which annoyed Terry. Since then, the two have clashed over other work-related issues.

Up until recently, Terry hadn’t been focused on her social life. So, she joined a matchmaking service and set up a blind date on Valentine’s Day. At first, Terry thought Chet Driscoll (Chris Van Etten) was her date and the two of them struck up a conversation. Things were going well until Terry’s real date arrived. Terry and her date didn’t get along at all and the conversation became slightly heated. Chet stepped in and defended Terry, and the date left. Chet and Terry realized they had a connection and planned to go out on a date soon.

But before Terry and Chet could have an actual date, Chet went overseas on an extended trip. But they kept in contact and both were looking forward to finally getting to know one another. It was during this time that tensions between Terry and Amy began to escalate! Since Terry and Chet are just starting to get to know one another, the fact that Amy and Chet are siblings hasn’t come up yet. But Amy heard through the rumor mill that her brother is dating Terry. Already unhappy with Terry, look for Amy to interfere in her brother’s life!

Amy isn’t known for keeping her mouth shut, and this situation will likely be no different. Chet will hear Amy’s concerns but will inform her that she should work out her issues with Terry without involving him. Chet knows Amy quite well, so he knows that she may be making more of her issues with Terry than is really appropriate. Chet won’t let Amy’s concerns keep him from dating Terry. Instead of taking Chet’s advice and making nice with Terry, Amy will become even more determined to stop Chet and Terry from seeing one another. Amy will likely try to make life difficult for Terry at the hospital and there’s no telling how far she will go if she believes she needs to protect Chet!

Will Amy try to make nice with Terry? Or will she be determined to come between Chet and Terry? Will she force Chet to choose between her and Terry? Anything can happen in Port Charles so stay tuned to General Hospital airing weekdays on ABC. And don’t forget to check back right here regularly for all your General Hospital news, information, and spoilers!