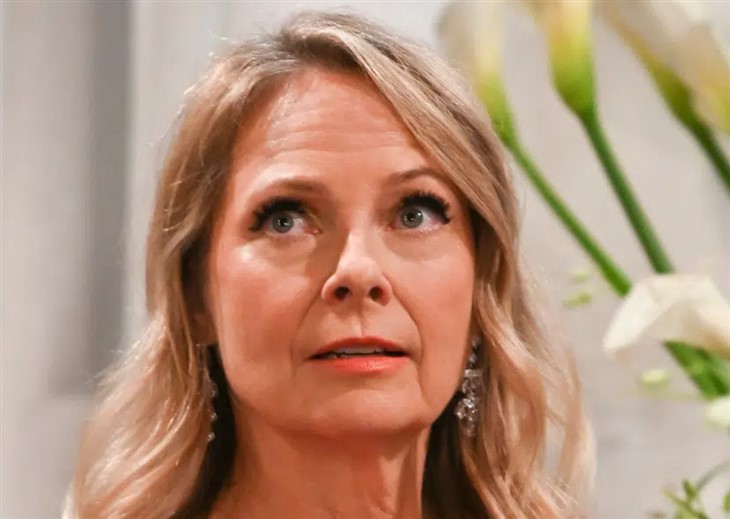 Gladys already has Paparazzi Felty’s (Brian Norris) memory card from his phone – that is why he was chasing after Gladys and Sasha in his car, causing a fatal crash! There has been no fault assigned in the crash, however since Harmony Miller (Inga Cadranel), the victim darted in front of the car and the crash couldn’t have been avoided. Felty had snapped photos of Sasha outside the Metro Court Gardens and one of them showed her picking up her pills she had dropped.

Felty was going to make a big name for himself exposing Sasha as a druggie; they couldn’t have that just as Deception Cosmetics had a very successful initial public offering! But Gladys had a close call at work, when Valentin Cassadine (James Patrick Stuart) caught her looking at the photos on her work laptop and saw the photo!

Gladys quickly covered, telling Valentin that Sasha’s pills were migraine meds, even though Valentin seemed a little suspicious at the time. Valentin let it slide since knew Sasha very well, and knew the rough times she had been through – some of them because of him! Viewers will remember that Valentin was responsible for Sasha coming to Port Charles in the first place – playing the part of Nina Reeves’ (Cynthia Watros) long-lost daughter! But Gladys is concerned about the pills she saw in the photo of her daughter-in-law; she is worried, and rightly so, that she’s again turned to pills to cope. Sasha flushed the pills that she’d been photographed with, but it would only be a matter of time before she’d get some more!

Gladys has changed since she lost her grandson to death, and she has become much more motherly and accepting of Sasha. There is probably some part of that that is simply accepting the status quo since she couldn’t stop Brando Corbin (Johnny Wactor) from marrying her. She hasn’t quite lost her nosiness, but this time she determines to put it to good use – and show tough love, like a mother of a teen on drugs.

Gladys will keep an eye on Sasha; her looks, her behavior, and if she seems off, she won’t have problems intruding by looking in her purse for her own good! Even though Sasha and Brando weren’t even dating back then, she remembers that she nearly died from one of Cyrus Renault’s (Jeff Kober) drugs he was pushing at the time!

Gladys sees Sasha acting a little strange and jittery like she was at the Deception IPO party before Felty ran after her with the camera! No doubt, as the Face Of Deception and their model Sasha should be used to cameras! Gladys had found that strange – she had even talked to Carly Corinthos (Laura Wright) about it with her concerns! She snoops in Sasha’s purse and finds the pill bottle and privately confronts Sasha about them. It’s a new method for Gladys, but she attempts to make Sasha feel safe that she can get her help to get off the pills and learn new coping mechanisms!